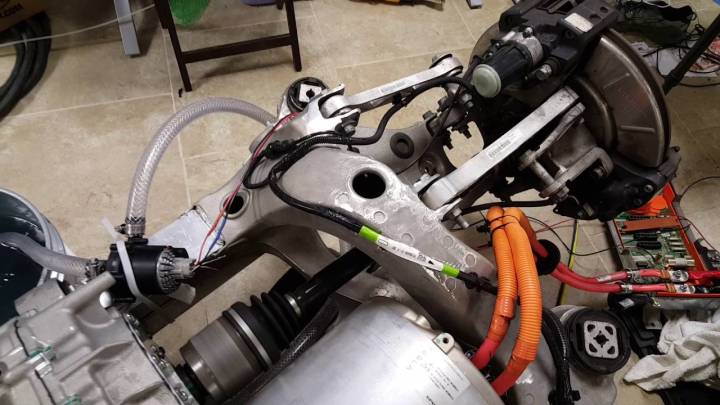 A regular Tesla with all the bells and whistles produces 532 horsepower. This is enough to literally scare people shitless, or thoroughly embarrass the crotchiest of crotch-rockets. So why would you hack yourself together a 1,000hp custom electric vehicle? Because speed is a drug, and 1,000 all-electric horsepower is a great middle finger to the internal combustion engine.

Jason Hughes is well known within the EV community as a Tesla hacker. He retrofitted an Autopilot system to and older Tesla Model S, but his new project is way more ambitious. He’s planning on fitting a Tesla drivetrain and Chevy Volt batteries into some kind of non-electric vehicle, quite possibly an old Mitsubishi.

Electrek got the details on Hughes’ upcoming build, which promises to be quite something. He’s using two Tesla performance drive units — basically, the business end of a Model S P90D — and putting both of them in one vehicle. Two Chevy Volt batteries will be supported by six Tesla battery modules, with a custom controller hooked up to control the whole thing.

Hughes already put a video of a test of the drive units and controller up on his YouTube, so in theory, the hard electrical engineering should already be done. According to Hughes’s estimates, the car should have a 120-150 mile range, not bad for a 1,000hp beast.

Electrek thinks the final car is going to be a Mitsubishi 3000GT. It will look inconspicuous enough that it should burn anyone at the lights — assuming Hughes can upgrade a 200hp car to take a thousand, that is.