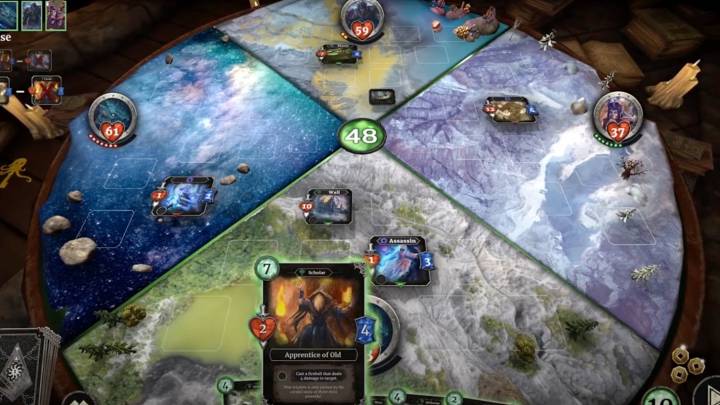 Blizzard’s Hearthstone is one of the most popular online collectible card games (CCG) on the market. It’s available on iOS, Android, Windows, and Mac and you get to craft a deck of cards comprised of spells and minions, and hope a combination of wits and luck will be enough to beat your opponent. You can build your way up and collect more cards as you gain in-game currency, or buy them in bulk to get access to the latest releases.

It’s a lot of fun, and it’s the kind of multiplayer game that you can play anywhere. Many competitors have challenged it, including Magic: The Gathering Arena, Gwent, and Legends of Runeterra, to name just a few. But what if you could add more players to the same fight? And what if you could add a new game mechanic where you’d be able to team up with others when it’s convenient, and then stab them in the back, in pursuit of victory?

As always with crowdfunding projects, anything could happen, so think twice before investing in Dark Table. But I’ll tell you in advance that the developers at Doonamai surpassed their initial $10,000 goal with nine days to spare. In fact, they’re at over $15,000 in pledges, so the project is already funded. You’ll have to pledge at least $10 to secure access to the game, although 265 other backers have spent an average of $60 for the game.

I’ll also tell you that the game will be ready in December 2021 if all goes well, so you’ll be waiting quite a while for Dark Table. But if it’s successful, then we may be looking at the future of CCG. Dark Table will be available on PC, PlayStation, and Xbox, and it’ll hopefully run on mobile devices too at some point in the future.

What really attracted me to this project as soon as I saw the presentation is the four-player mechanic and the politics that are part of Dark Table. The developers say it’s like bringing Poker to a CCG. But it feels more like Game of Thrones, especially if you’ve played any of the Game of Thrones board games.

Each player will be in control of a leader who will be able to recruit heroes that fight for them, build defensive positions, and deploy spells. Each preparation (release) phase is followed by a battle phase, and all of these will trigger various powers, both for heroes on the field and the leader.

The units themselves have different powers and abilities, and the game developers propose a new battle scenario where a unit’s experience can make the difference between life or death. The higher the skill, the less likely for the unit to take damage, even if the actual damage it can deliver is lower than the target’s.

On top of that, players can talk and mark their alliances. Anything goes, and the objective is to be the last hero standing. The game will have modes that reward other achievements, such as dealing damage, upsetting the game balance, or going for strategy plays. Obviously, the most fun will be outsmarting the other three players at the table.

Will Dark Table be successful? Only time will tell. Alpha access starts in May next year and requires a minimum pledge of $40. Until then, you can keep playing Hearthstone and all the other CCG alternatives that are available right now on your favorite platforms.