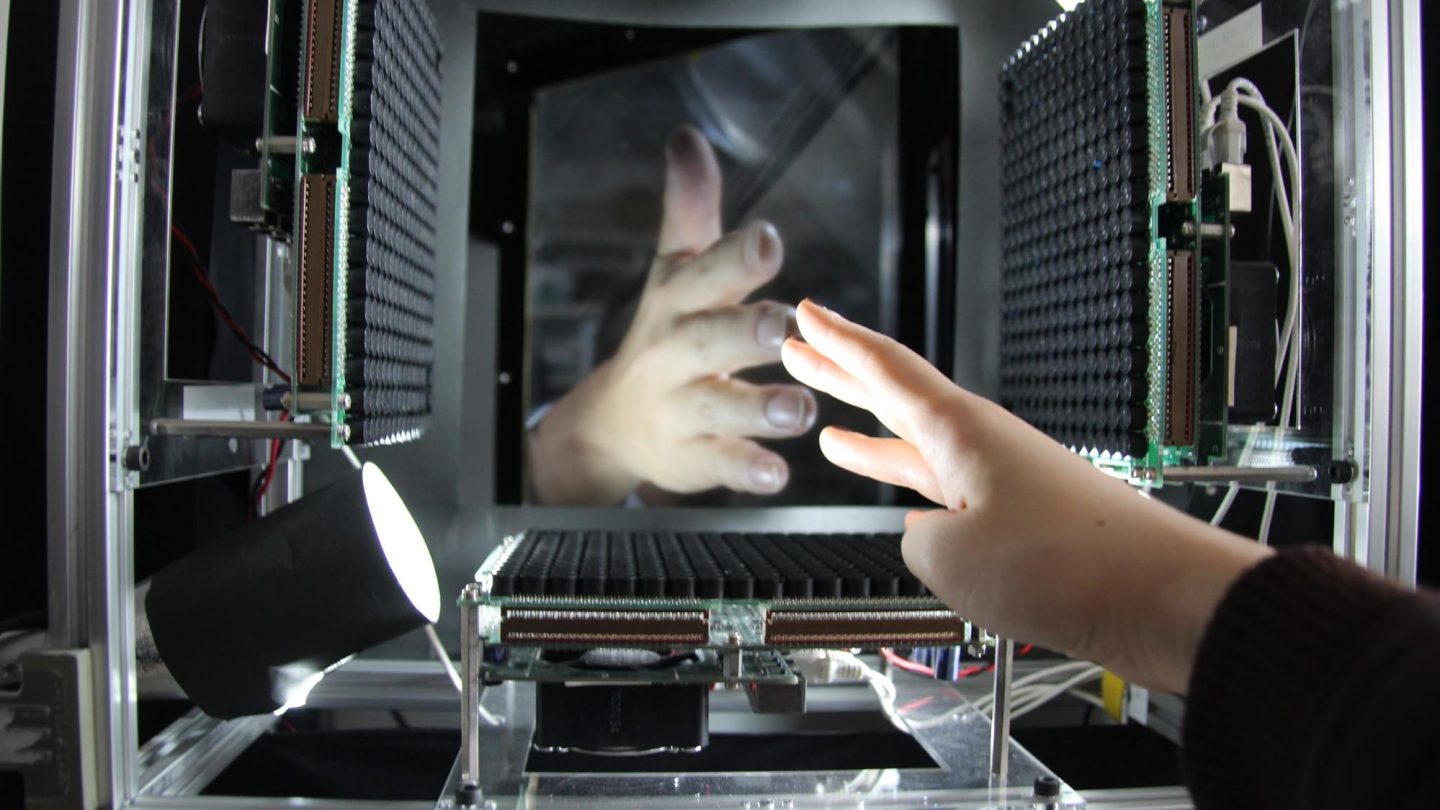 Virtual reality, augmented reality and holograms might not mean anything to you right now, but these new technologies will likely play a major role in future generations of smart devices, including mobile computers such as phones and tablets. Many companies, including top tech players, are currently developing their own VR and AR projects, though independent researchers are also working on such innovations.

For example, Japanese engineers have figured out how to create holograms that you can actually touch.

Haptics researchers from the University of Tokyo’s Department of Complexity Science and Engineering (DCSE) are working on the project, according to Motherboard.

Their product is called Haptoclone and it offers users an interactive system that supports “telehaptics.” That means you’d be able to send a holographic image of your hand or face to a contact who uses the same kind of device, and experience the illusion of actually touching the other person.

The idea was first introduced at the SIGGRAPH 2015 conference on computer graphics and emerging technologies. The product is not commercially available, but coupled with other VR and AR projects, Haptoclone technology could help create even more immersive digital experiences – assuming DCSE’s prototype is someday incorporated into commercially available products.

“It would be great to allow people in different locations to communicate with one another while experiencing a sense of touch. We could, for example, put a transparent glass here and divide the room,” Yasutoshi Makino said. “Imagine if you were in a zoo, and there was a lion on the other side of the glass that you could have the sensation of touching.”

Researcher Yoshikazu Furuyama added, “The images are so realistic, so it would be great to correlate the sense of touch with that. I guess that would increase the realness of it all.”

The Haptoclone uses a kinect sensor to capture motion in real time and four ultrasound arrays that emit ultrasonic radiation pressure, which is how the computer makes you believe you’re actually touching the person on the other end.

While exciting, this kind of tech trickery is not necessarily easy to accomplish, mainly because of the high cost involved. Researchers are currently using expensive aerial imaging panels, though they hope to replace them with regular cameras that could make long-distance hapto-optical communications more affordable.

“Ultimately, we want to continue clarifying the function of haptic sensations to enhance and enrich human communications,” said Shinoda.

Of note, there also are safety concerns to take into account. “The [level] of ultrasound we’re currently using is very safe, but if it’s too strong, ultrasound can damage the insides of the human body such as the nerves and other tissues,” University of Tokyo’s Hiroyuki Shinoda said. “We have to consider the limitations.”

Check out the video below to see the Haptoclone in action.