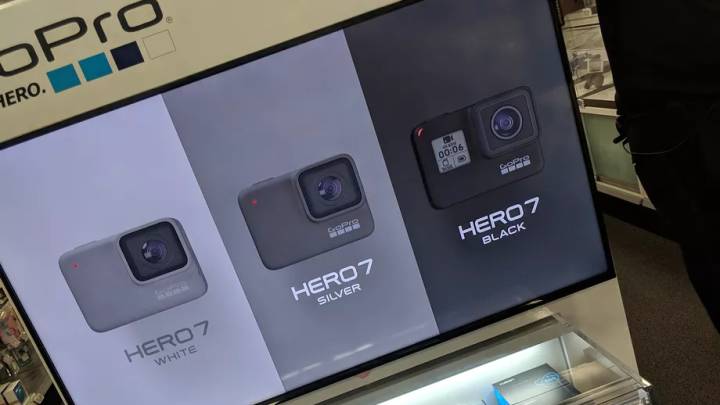 Because it is now impossible to announce a new electronic device without having it leak ahead of time, GoPro’s next camera was spotted on a video display in Best Buy over the weekend. Although many of the images have since been deleted, a user on Reddit shared photos of what looked to be a video showcasing the unannounced Hero 7 camera. GoPro was expected to officially reveal the camera before the end of the month.

Providing the information in the video is correct, the GoPro Hero 7 will be available in black, white, and silver colors. The design looks virtually identical to that of the Hero 6, which itself wasn’t a major diversion from the Hero 5. Also, only the black model will come with a display on the front, while the white and silver will not.

Unfortunately, if there were any shots of the video with specific specifications, we haven’t seen them, as the only thing we know about the camera (other than its design) is that it will be waterproof up to 33 feet. It’s been just under a year since the last Hero camera launched though, so we should probably expect this to be an iterative upgrade.

As The Verge points out, GoPro is in something of a transitional phase at the moment, having cut its lineup of flagship cameras to just three models back in 2016. There’s still plenty we won’t know about the Hero 7 until more leaks arise or the announcement is made, but it doesn’t appear to be a game changer.