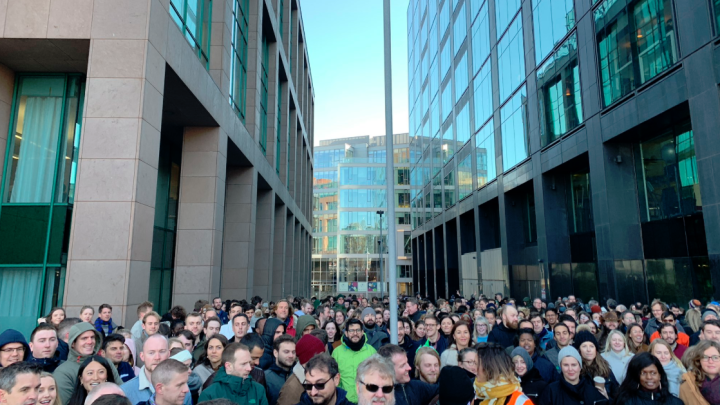 Google employees around the world are walking out of their offices and refusing to work in protest of the company’s handling of various internal scandals involving men high up in Google’s ranks. As CNN reports, the walkout has been rolling across the world as employees depart their desks at 11:10 a.m. local time in an effort to show the company that they are unhappy with its internal culture.

The walkouts are the result of an explosive report published in the New York Times last week that describes how Google dismissed, ignored, and in some cases covered up stories of sexual misconduct by its male employees by having victims sign confidentiality agreements to ensure word didn’t spread.

There are a lot of names mentioned in the report, but perhaps the most high-profile case involves Android creator Andy Rubin, who left the company in 2014 with a $90 million parachute to ease his fall. As the main man behind Google’s mobile operating system, getting paid a heap of cash on his way out might seem appropriate, but the report revealed that the real reason for his exit was that he had allegedly “coerced” a female Google employee into a sexual encounter.

Google launched an internal investigation and found that the claims were credible. At that point the appropriate and entirely reasonable thing to do would have been to send Rubin, who was married at the time of the incident, packing with a cardboard box and little else. Instead, the sent him off like a king.

The same pattern pops up with many other powerful men within Google, including David C. Drummond, who was Google’s general counsel and is now chief legal officer of its parent company Alphabet. Drummond cheated on his wife with a female Google employee, had a child with her, and Google reassigned her after finding out about it. She left the company shortly thereafter.

Google’s former search chief Amit Singhal is also featured in the report for having allegedly groped a female employee at a work event. Google’s investigation supported the victim’s version of events and was not fired but instead was asked to resign, allowing him a multi-million dollar exit package.

The walkouts are still ongoing, and the organizers apparently plan on dozens of Google offices taking part. With all of this going on you might think that Google CEO Sundar Pichai would be doing his best to pull the curtain down but he has instead voiced his support for those participating in the walkout, stating that the employees who choose to leave their posts have the company’s full support.