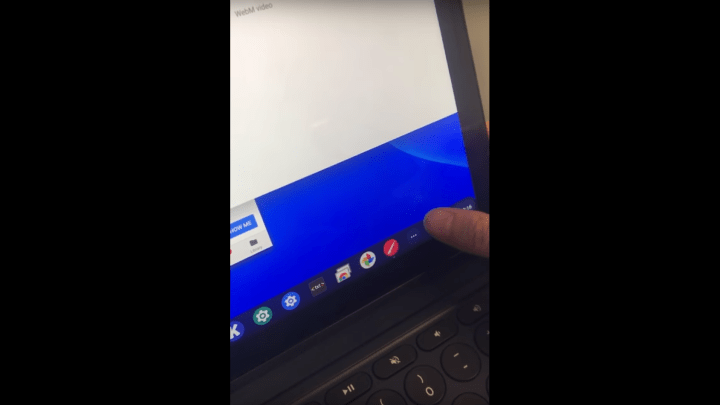 “Taking inspiration” from other product lineups is a storied tradition in the tech industry, so it’s not really fair to criticize Google for its cribbing here. In fact, if this brief leaked video is anything to go by, Google might be taking Microsoft’s original idea and giving it the execution it so richly deserves.

The leak comes from Chrome Unboxed, a tiny Chrome OS-specific blog that has been slavishly documenting the unglamorous world of Chromebook leaks for years. It found a video that came from the Chromium Bug Tracker and pulled it down. The video is just a few seconds long and only shows a corner of the device (it looks to be part of a bug report), but it can give us some relevant insight into the details of this device.

Firstly, we can see thin bezels on both side, and a high-res screen. Chromebooks generally tend to be on the cheaper side; the only manufacturer that has tried to make high-end Chrome OS devices is still Google. Basically, the appearaence of just a few high-end features — like thin bezels and a high-res screen — is enough to make us think that this is a Pixelbook device.

There’s also the matter of the keyboard, and how it appears to attach to the device. The keys themselves are rounded, which is an unusual choice for a keyboard. Rounded keys are sometimes used to make a small keyboard feel bigger, so they’re more popular on detachable tablet keyboards than a fully-fledged laptop. You can also see that the attachment between screen and keyboard is bigger than you’d expect from a conventionally-assembled laptop, so there’s a strong chance this is some kind of detachable device.

From previous rumors, we believe that Google has two Pixelbooks in the works, codenamed “Nocturne” and “Atlas.” It’s not entirely clear which is which, but there’s a good chance that at least one of the two will be unveiled at Google’s October event, so we don’t have long to wait.