One of the interesting things about Google is that the search giant has a lot of legitimately cool software that most people simply aren’t aware of. A prime example of this is Google Lens, an image recognition app for iOS and Android with a number of interesting and downright awesome features.

If you’re not familiar with Google Lens, it’s as fascinating as it is useful. One of the app’s cooler features allows you to point your smartphone camera at nearly any product — from a can of lemonade to a book to an Xbox controller — and the app will tell you what it is and where you can buy it online. Even better, you can point your camera at text in a foreign language and the app will translate it for you in real-time. The app supports more than 100 languages and is truly a godsend for folks traveling internationally.

Looking to up the ante, Google today announced a number of new productivity features for Google Lens that are definitely worth checking out. With the new update, Google Lens now allows users to point their smartphone camera at a string of text, copy it, and quickly paste right into a document on their computer.

Now, when you select text with Lens, you can tap “copy to computer” to quickly paste it on another signed-in device with Chrome. This is great for quickly copying handwritten notes (if you write neatly!) and pasting it on your laptop without having to retype them all.

You can check out the handwriting translating and the copy and paste feature via the gif below:

Another feature baked into the new Google Lens update is the ability to learn how to pronounce words in any language.

“Now, you can also use Lens to practice words or phrases that are difficult to say,” Google says. “Select the text with Lens and tap the new Listen button to hear it read out loud—and finally figure out how to say “hipopótamo!” 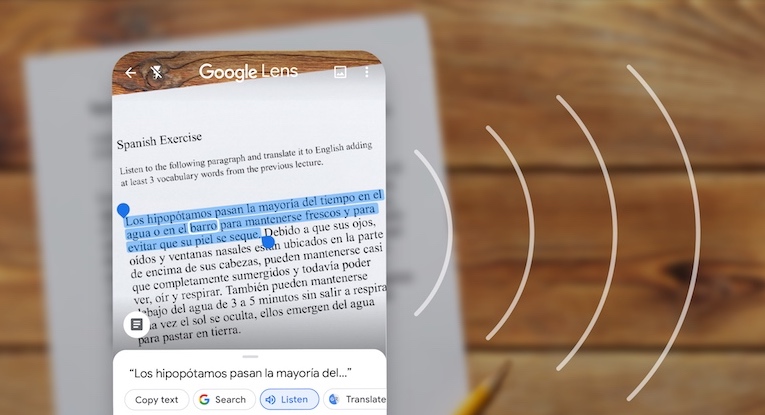 Another language-oriented feature allows users to select a word or phrase they don’t understand and view in-line Google search results to learn more about it.

If you come across a word or phrase you don’t understand in a book or newspaper, like ‘gravitational waves,’ Google Lens can help. Now, with in-line Google Search results, you can select complex phrases or words to quickly learn more.

Google Lens is available via the Google App on iOS or via a dedicated Google lens app on Android. As for the aforementioned features, all of them will be available on Android starting today. If you happen to be an iOS user, the Listen feature will be coming a little bit later. Also note that for the copy and paste feature to work, users must be signed into the most recent version of Chrome.

Lastly, a list of existing Google Lens features not mentioned above can be seen below. Suffice it to say, if you haven’t played around with Google Lens yet, it’s definitely worth downloading and checking out.

SCAN & TRANSLATE TEXT
Translate words you see, save a business card to your contacts, add events to your calendar from a poster, and copy and paste complicated codes or long paragraphs into your phone to save time.

IDENTIFY PLANTS & ANIMALS
Find out what that plant is in your friend’s apartment, or what kind of dog you saw in the park.

EXPLORE PLACES AROUND YOU
Identify and learn about landmarks, restaurants, and storefronts. See ratings, hours of operation, historical facts, and more.

FIND THE LOOK YOU LIKE
See an outfit that catches your eye? Or a chair that’s perfect for your living room? Find similar clothes, furniture, and home decor to the one you like.

KNOW WHAT TO ORDER
See popular dishes on a restaurant menu based on reviews from Google Maps.