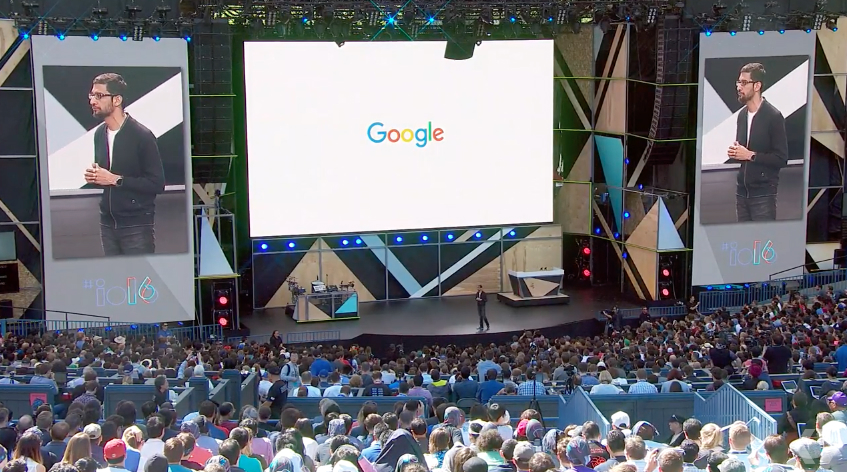 Google I/O is finally winding down, after three days of announcements on announcements. I/O is a developer conference, so a lot of the features on display aren’t exciting if you’re not into SDKs.

But amidst the techno-speak, Google made some huge reveals. Here’s everything you missed, if you spent the last three days in a cave.

Google Home is a smart voice-controlled Bluetooth speaker that Google wants to control your smart home — and eventually, your life. It’s also the new face of Google’s smart assistant, which oddly enough doesn’t have a name (Google just wants you to call it ‘Google‘).

It’s a big deal, not just because it looks like a killer piece of hardware, but because of what it says about Google’s future ambitions. In other product unveilings over the last few days, Google has shown that an intelligent AI is going to be at the forefront of all its products going forwards. Google Home is the first wave of something much bigger to come.

Smartphone doomsayers love to talk about “app exhaustion” — the idea that no-one can be bothered to download and install new apps any more. But if Google has its way, you won’t have to.

Instant Apps are a new concept for Android. Basically, apps will be divided up into little chunks, each of which can work on their own. It means apps will instantly install, downloading themselves onto your phone when needed.

It brings all sorts of new functionality to people’s smartphones, and should make it even easier for devs to write apps to do cool stuff. Best of all, it’s not a feature coming in some future version of Android — it all depends on the apps, which means Instant Apps will work on any semi-modern phone.

Google has a VR platform, and it’s called Daydream

Google has been nibbling around the edges of virtual reality for a while with 360-degree YouTube videos and the Cardboard viewer. But with Daydream, Google is making its intentions clear.

There will be special smartphone-based VR headsets, based off reference specs provided by Google, and Daydream-capable smartphones to go with them. A who’s-who of Android manufacturers has already committed to making Daydream hardware, which should give virtual reality a kick in the pants. This time next year, you can expect most flagship phones to be VR-ready.

To go with the new hardware, Google is also pulling out the stops to make a comprehensive library of apps, movies and games to experience in VR. This is probably where Google see the money — rather than producing finicky hardware that will have to compete with the likes of Oculus Rift and HTC Vive, Google’s making a play to brings its apps and experiences to other people’s hardware instead.

There’s a Google-made phone coming next year, and it’s cool as hell

Project Ara is a concept for a modular phone that Google unveiled way back in 2014, which promises to make smartphones truly modular. It relies on a base skeleton, which contains core components like a motherboard, processor and RAM. From there, consumers buy “blocks” like screens, cameras, batteries and sensors, which attach to the phone via proprietary slots.

The original concept has been changed somewhat — the processor and RAM were meant to be interchangeable, so that your phone would never go obsolete — but the fact that a fully modular phone is coming to market is incredible at all.

It’s also a big step for Google to be manufacturing a handset (of sorts). Google has made reference designs in the form of the Nexus design for years, but that’s always been in partnership with other manufacturers.

Bringing Ara to market is also a milestone for ATAP, Google’s special projects division. It’s clearly more focused on getting stuff made these days — ATAP also announced a collaboration with Levi’s to make a smart jacket, launching early next year.

Chrome OS, the software that powers Chromebooks, has been mostly overlooked by third-party developers, and still has limited functionality as a result. But Google is adding the ability to run Android apps on Chrome OS, and giving us all a million new reasons to buy a Chromebook

It’s also the first move to merge the two platforms. Windows is slowly merging Windows 10 and Windows Phone, but if Google can pull off a successful union of Chrome and Android, it could have big players in desktop and mobile — especially considering Chromebooks are now outselling Macs.