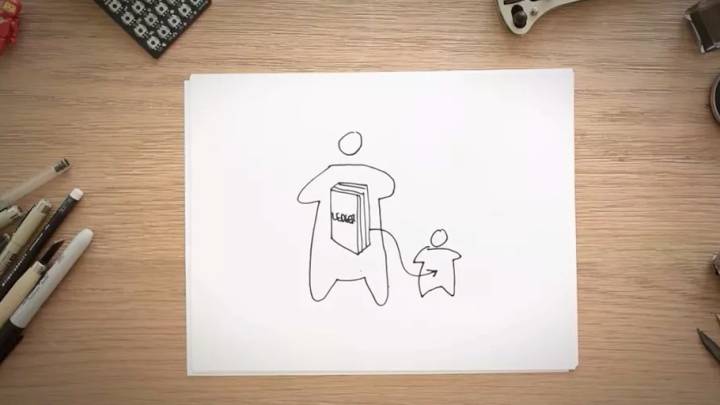 If you thought Google’s data collection practices were creepy, then wait until you hear about what the future holds.

Google may be looking to turn data collection into a tool that’ll be more powerful than merely generating more money each quarter. Total data collection may be used to create complex behavioral models that could be passed on to new generations of Google customers, and that complex data could also be used to alter the user’s behavior, which is just as disturbing as it sounds.

It all sounds like a screenplay for a movie about a super powerful corporation that turns evil, and actually it is all based on a film — one made by Googlers for Google’s own use.

Called The Selfish Ledger, the video is just 9 minutes long and was created a couple of years ago by Google X design head Nick Foster. According to The Verge:

It imagines a future of total data collection, where Google helps nudge users into alignment with their goals, custom-prints personalized devices to collect more data, and even guides the behavior of entire populations to solve global problems like poverty and disease.

Foster imagines a future where the data Google collects about us would allow it to create “ledgers” of data that could be passed on to new generations just like genetic information.

We already know that Google is betting big on artificial intelligence to improve its many services. And data collection may be one of them. In fact, the video does offer an example where AI would be able to realize that a user lacks a bathroom scale, which could provide additional data, like how much the user weighs. So the machine would be able to make decisions such as 3D-printing a scale for its master.

Google said in a comment that the video’s purpose is to spark conversations inside the company, and that’s totally understandable:

We understand if this is disturbing — it is designed to be. This is a thought-experiment by the Design team from years ago that uses a technique known as ‘speculative design’ to explore uncomfortable ideas and concepts in order to provoke discussion and debate. It’s not related to any current or future products.

But that doesn’t make it any less frightening. Because this is Google, a company that’s pretty fluid when it comes to user data, privacy, as well as ethics. Google Duplex is the best example of that.

Interestingly, the device shown in the video is an iPhone, not an Android smartphone, which is the kind of gadget that offers Google massive access to user data.

Check out the full video over at The Verge.