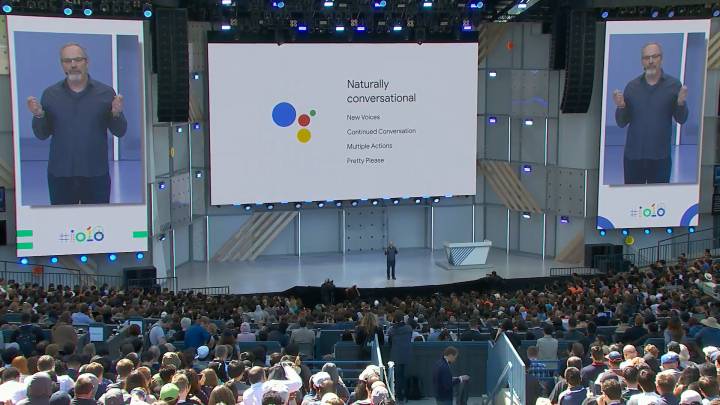 Google is rolling out an update to its Google Assistant user interface today that will make switching from the different options you have for the software’s voice — there are eight choices now — a matter of simply picking a color.

In the new UI, Google is assigning random colors to what are now labeled as Voice 1, 2 and on up to Voice 8. The randomness means no one’s association of a color with a particular option should be the same — which some of the commentary over the interface has already praised because of the gender implications.

The color pink, for example, doesn’t have to be forced onto a female voice option in this scenario, for example. Google, The Verge noted in light of today’s news, has been sweating these kinds of details in rolling out new features.

“These types of sociological reinforcements by way of technology may have an impact on how we think of and view these personified software products going forward, in the same way that parents fear young children are being raised not to behave courteously or say thank you because it’s not required when conversing with a digital assistant in the home. Google is even going out of its way to address the latter issue, with a feature called “pretty please” announced back in May that’s designed to teach and reward children for politeness when engaging the Assistant via voice.”

The color-based Assistant update, meanwhile, is coming in a rollout soon for U.S. users who’ve chosen English as their language.

It’s another fun, lighthearted update for Google Assistant that follows Google CEO Sundar Pichai’s announcement at I/O this year that one of the new voices would be that of singer John Legend.

We should note that Google is starting to make headway in shipments of its devices that include Google Assistant — headway, that is, in its fierce competition with Amazon in the smart speaker wars. According to market insight firm Canalys, for example, Google shipped 3.2 million Google Home units in the first quarter, compared to 2.5 million Amazon Echoes.

Check out our earlier report, here, about people are increasingly seeing Google’s Assistant as excelling at understanding you — at being a useful, conversant digital assistant. Compared to something like Amazon’s Alexa, which is a useful entry point into buying things.