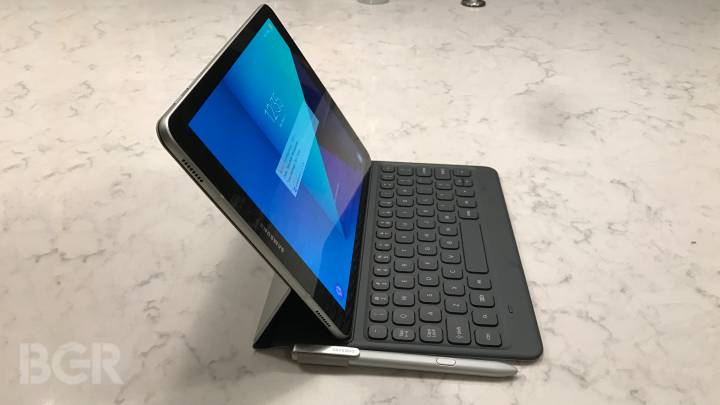 If you’re in the business of buying Android tablets, then you should hang on to your hard-earned money for a few more weeks, as Samsung is about to unveil at least one new device. It’ll likely happen at IFA in early September because there’s not going to be a Galaxy Note 9 announcement at the event.

When Samsung does announce its newest tablets, there’s only one you should really consider, the flagship model that was leaked just a few weeks ago teasing a few exciting features.

That’s the Galaxy Tab S4, the successor of last year’s Tab S3 series, and Samsung’s newest response to Apple’s iPad. We know the tablet is real because we have an even better leak this time around: Press renders from the infamous Evan Blass.

The images confirm what the previous leak revealed, that the new tablet will have a more appealing design — check out the thinner bezels on this one:

Furthermore, there’s no home button on the front side, which is also an interesting change.

Blass also posted an image showing the new S Pen stylus Samsung made for the tablet, and it looks like this:

In fact, looking at it, I can’t but wonder whether that’s the S Pen that will be found inside the Galaxy Note 9. After all, reports do say that Samsung’s next smartphone will have a Bluetooth-enabled stylus ready to be used for a lot more things than jotting down ideas and drawing.

Here’s another look at the stylus, this time in silver, and this time right next to a silver version of the tablet.

More of that "white." pic.twitter.com/pQltterQJv

We have no pricing details and actual launch dates for the Galaxy Tab S4, but all should be revealed very soon. Oh, and if you’re shopping for Android tablets on a budget, then the Samsung Galaxy tablet you’re looking for is probably this one.