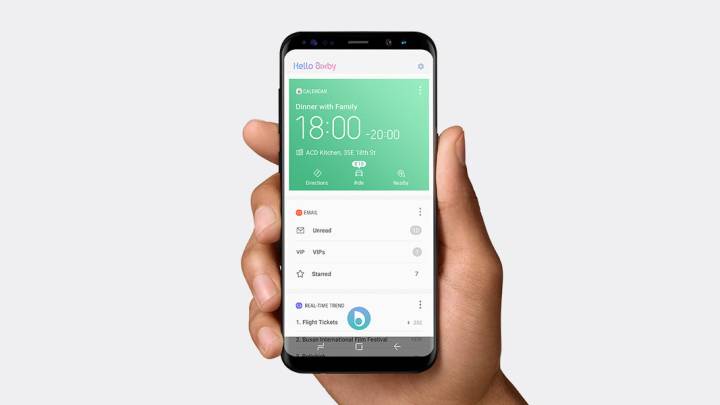 After dusting itself off following the Note 7 fiasco of 2016, Samsung this year came back strong with the release of the Galaxy S8 and S8 Plus. Sporting a new infinity display along with some solid hardware upgrades, Samsung’s premium 2017 smartphone lineup has been well received by both reviewers and consumers. In fact, after unveiling the device this past April, Samsung noted that pre-orders for the S8 in particular were 30% higher than what Samsung saw last year with the S7.

Hardware improvements aside, one of the flagship features of Samsung’s S8 lineup is a new intelligent voice assistant dubbed Bixby. Designed to compete with rivals such as Siri and Google Assistant, Bixby has been available to S8 owners in South Korea for a few weeks now, yet its voice features still remains unavailable to owners based in the U.S. What’s more, a new report from The Wall Street Journal relays that a full-fledged version of Bixby may not even land in the U.S. until June at the absolute earliest.

According to the Journal, an English working version of Bixby remains a heavy work in progress and is still “weeks away from being finished.”

“Recent internal tests of the service,” the report adds, “have revealed that the voice-activated assistant is struggling to comprehend English syntax and grammar…”

With Bixby being positioned as one of the key features of the S8 experience, the ongoing delay is far from a good look from Samsung; all the more so given that the S8 includes a button solely dedicated to launching Bixby.

Regardless, with demand for the S8 being as high as it is, it’s clear that many consumers aren’t being drawn to the S8 and S8 Plus because of Bixby. Indeed, it’s hard to imagine that most consumers will base a smartphone purchase decision on its intelligent assistant software.