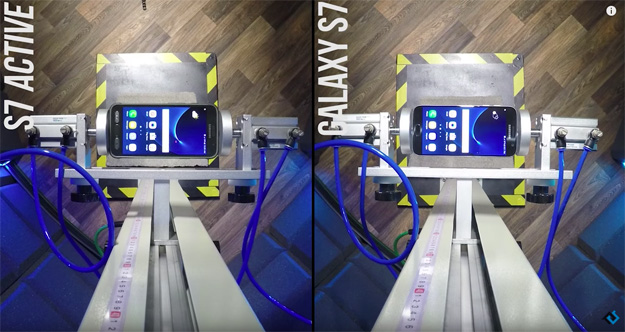 Samsung bills its new Galaxy S7 Active as the most rugged and durable phone the company has ever released, but you know that the internet isn’t just going to take Samsung’s word for it. No… launching a smartphone along with the claim that it’s rugged is an open invitation for anyone and everyone to put that claim to the test, and it wouldn’t be long before someone rose to the challenge.

Samsung has a long history of making “Active” edition phones alongside its flagship Android handsets, and we know that previous ones have been quite rugged indeed. But the Galaxy S7 and Galaxy S7 edge both have a glass back and glass face that have done horribly in drop tests. Can a phone that shares the same name possibly be the most durable handset Samsung has ever made?

YouTube user PhoneBuff put the new Galaxy S7 Active to the test using a professional-grade drop test machine, and the results are very fun to watch. The new Active model was pitted against the standard Galaxy S7, but it was pretty obvious there would be no contest there; the glass on the back on the regular S7 shattered after just the first drop.

The Galaxy S7 Active, however, was an entirely different story.

We won’t spoil the ending for you, but we will say that this was easily the most savage drop test PhoneBuff has conducted so far. You’ll find the full video embedded below.