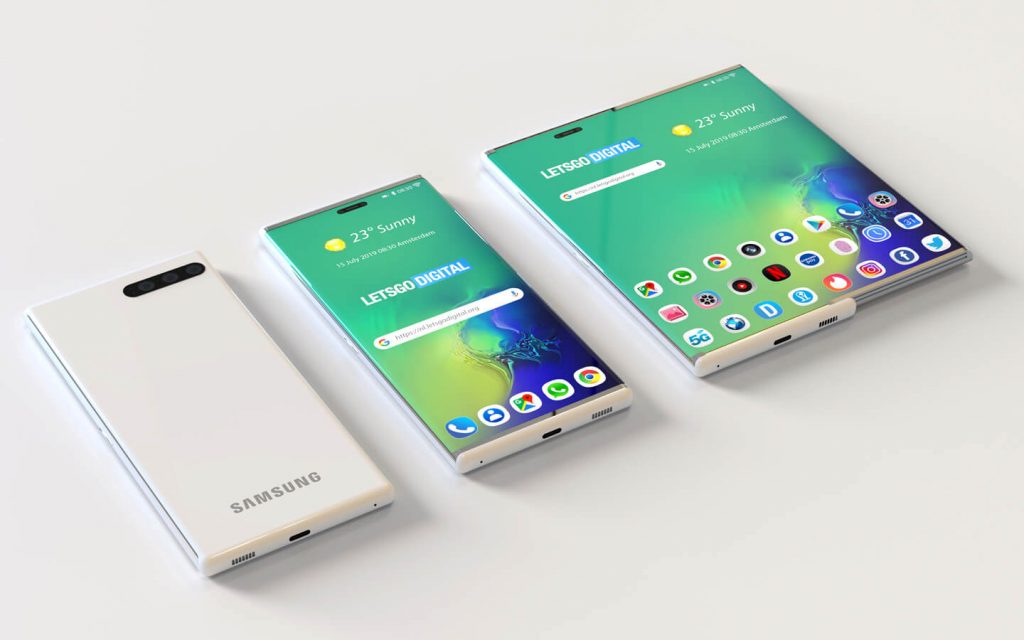 With the release of the Galaxy S10 earlier this year, Samsung made its biggest leap forward in terms of design since the launch of the Galaxy S6 edge in 2015. From the phone’s Infinity-O display to its ultrasonic fingerprint sensor to its triple rear camera, it quickly became one of the most advanced smartphones on the market. But if newly-discovered patents are any indication, Samsung has even bigger plans in store for its 2020 flagship.

Over the weekend, Dutch technology blog LetsGoDigital shared images from a Samsung design patent which shows off a phone with an expandable display. The patent was filed late last year, approved this May, and then published on June 24th. As it often does, LetsGoDigital went to the trouble of mocking up the device.

We covered the patent early on Monday, but what’s most fascinating about this phone, which could be a new flagship device or an evolution of the Galaxy Fold, is that Samsung’s earliest attempt at a new mobile form factor has been an unmitigated disaster. Samsung had initially planned to launch its game-changing Galaxy Fold smartphone in April, but three months later, we still don’t have a release date. The Galaxy Fold will eventually be available for purchase, but at least in terms of marketing, the damage has been done.

As you can see in the images scattered throughout this article (which, again, are mockups created by LetsGoDigital and almost certainly not indicative of a final product), the hole punch on the display is about the same size as on the Galaxy S10+, seemingly to account for an additional front-facing camera. It has also shifted over to the center of the display, while the triple rear camera array on the back of the phone has moved to the top-right corner.

As for the expandable screen, it’s unclear exactly how it would function, but it would increase the size of the display by 50%. Providing it is more sturdy than the foldable screen of the Galaxy Fold, it could be a more viable solution to giving consumers more display without making the phone itself any larger.

The key here is that, unlike the Galaxy Fold, this device looks like a standard, modern smartphone when the screen has not been expanded. The same can’t be said for the Galaxy Fold, which features an uncomfortably small display on the front of the device and a massive, awkward cut-out on the inner display.

Whether or not the device pictured in this patent ever sees the light of day remains to be seen, but Samsung will likely be at Mobile World Congress once again in 2020, which means there’s a slim chance we could be introduced to the company’s first expandable smartphone in February or March of next year.