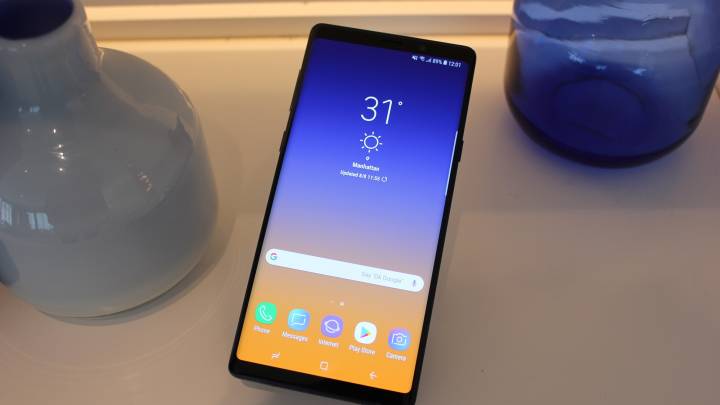 Samsung is trying as hard it can to compete against the iPhone, and it’s generally able to do so when it comes to matching Apple’s hardware offerings. Software is the areas where it can’t compete against Apple. Samsung doesn’t own any meaningful operating system, and it relies on Microsoft’s Windows and Google’s Android to power most of its devices.

That’s why it’s not surprising to see that Samsung partnered with Spotify to deliver music streaming options to Samsung device buyers, especially considering that it ran out of Milk a while ago. Not to mention that Spotify needs these sort of partnership on Android and everywhere else to compete against Apple Music, Pandora, and other music streaming options.

Spotify’s CEO Daniel Ek was one of Samsung’s guests on Thursday during the Galaxy Note 9 event, announcing that Spotify will be available on Samsung devices going forward. “Today, Spotify becomes part of the set-up experience on a Samsung device from the very beginning,” the exec said.

The Spotify app will be available on the Galaxy Note 9 and other Samsung phones, but also on Samsung Smart TVs, and the newly unveiled Galaxy Home smart speaker. In fact, Samsung demoed a scenario where music playback would adapt to the user’s needs, jumping from the phone to the TV or intelligent speaker.

The partnership gives Spotify premium placement on Samsung devices, and that’s undoubtedly an essential weapon in its fight against Apple Music. Apple Music, of course, is readily available on iPhones, iPads, and Mac computers. As it stands right now, Spotify is the largest paid music service in the world, but Apple is closing in.

The Samsung deal sent Spotify shares up by as much as 5.2% to $188, per Bloomberg, which was its biggest intraday gain in two weeks.

Samsung tried its hand at creating a music/radio streaming service of its own a few years ago. Milk Music, launched in 2014, was shut down just a few short years later.

Ironically, Verizon earlier this week announced an exclusive partnership with Apple that will deliver to Unlimited plan subscribers six months of free Apple Music. You can preorder a Galaxy Note 9 that comes preloaded with Spotify from Verizon, and use Apple Music for free for six months before even getting on Spotify. Apple Music is one of the few offerings in Apple’s ecosystem that offers an Android app.

Spotify, on the other hand, does have an ad-based tier available and the app will be the default music option for Samsung’s virtual assistant, Bixby, which is available on many phones and the new Galaxy Home speaker.