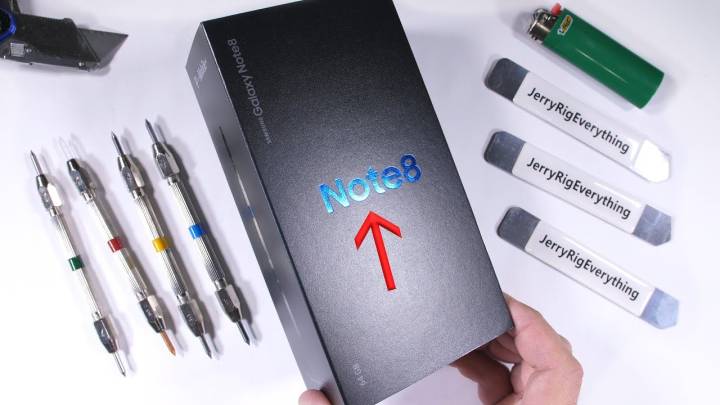 The Galaxy Note 8 has shipped to users ahead of schedule, which means that it’s already in the hands of abusive YouTubers. JerryRigEverything is a channel famous for its scientific torture of devices, and the Note 8 is getting the full treatment this time around.

Zack, not Jerry, is doing the honors this time. On paper, the Note 8 shouldn’t be the most durable phone around: it has glass front and back, a big dual-lens camera to get scratched, and it’s big enough for most people to drop easily.

But as Zack’s testing shows, you won’t need to totally baby this phone. Gorilla Glass 5 on the front only scratches at Moh’s level six hardness, which means most objects you come into contact with won’t hurt it. The same glass covers the front sensors and camera, meaning they’re all relatively scratch-free. Even the speaker grille is metal, so it’ll hold up to most abuse. Without any physical buttons on the front, the Note 8 is actually reasonably durable from that angle.

On the back, the fingerprint sensor is an immediate point of weakness. It scratches easily with a razor blade, which is bad for the long-term cosmetics of the phone. Scratches don’t affect the fingerprint reader’s usability, though, since it keeps working regardless.

The signature test involves a judicious application of cigarette lighter to the Note 8’s screen, which results in permanent damage after about 10 seconds. Given the previous Note’s problems with fire, maybe we should be glad that the damage is limited to that.