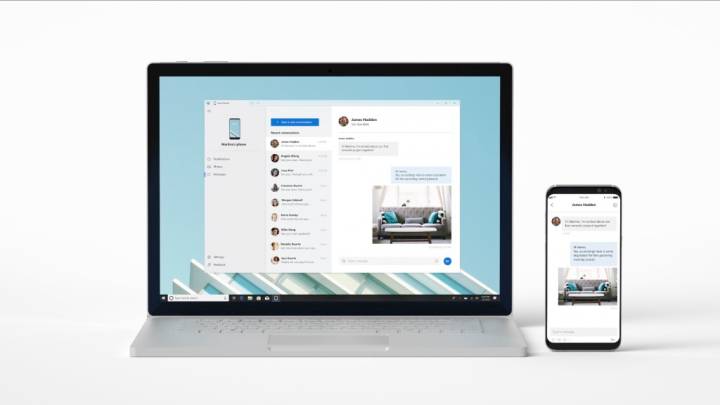 With each day that gets us closer to the early August launch of Samsung’s next flagship handset, we learn about more and more of the Galaxy Note 10’s secrets. Now, a brand new report out of Korea says the phone will have an exciting feature that’s not available on other Android devices out of the box, and that it’s all courtesy of Microsoft.

One of the great things about Apple’s iMessage service is that all your conversations are available on iPhone, iPad, and Mac, as long as you’re signed in with your Apple ID. Even better, you can use Macs to reply to both iMessages and regular SMS messages via the Messages app, which means you don’t have to switch devices to stay on top of your texts while you’re working.

There’s no such thing on Android, however, as Google is still struggling to come up with a worthy iMessage rival. But that’s the kind of functionality that’s coming to the Galaxy Note 10, per HankYung, as long as you also use Windows 10 computers.

Microsoft already announced the Your Phone Windows 10 feature that lets you mirror the screen of an Android phone to your Windows 10 PC. Your Phone will also let you interact with other apps on the phone, not just messaging apps. And that’s how you’ll be able to reply to all your Galaxy Note 10 SMS and chat messages directly from a Windows 10 PC.

The report notes that Your Phone, which will be preloaded on the Note 10, will also let your preview photos you’ve taken on the Note 10 directly on a PC. And you’ll be able to continue watching videos on a laptop or desktop with the same app.

Microsoft co-founder Bill Gates said a few days ago that his biggest professional regret is missing out on creating Android for Microsoft. But Microsoft has certainly made plenty of popular apps for both iPhone and Android that gives it a growing presence in the mobile world. And Windows apps like Your Phone could further help Microsoft bridge the gap between smartphones and PCs.