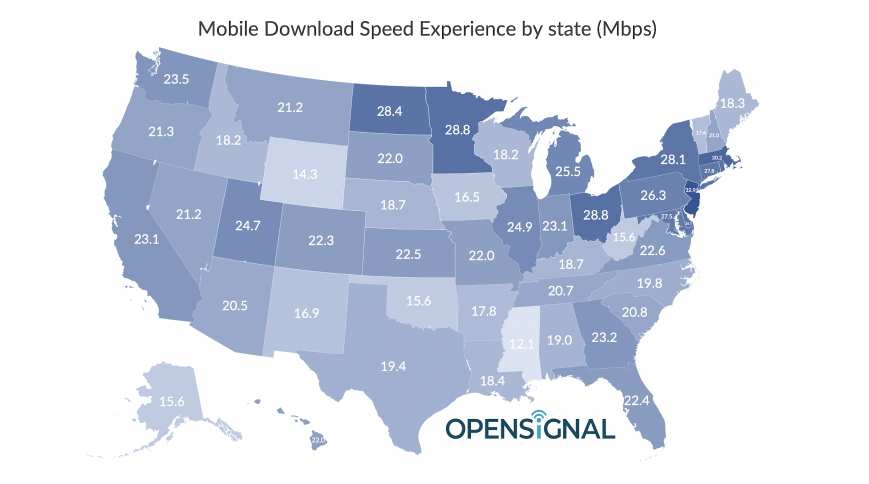 Opensignal has released a new report today about mobile network speeds in the US, offering an overview of how smartphone download speeds haven’t improved all that much from this time last year. The report goes into greater detail about that, in addition to ranking each state and the top 50 US cities with the fastest speeds.

Among the key findings of the report, tech hub cities surprisingly don’t excel when compared to the 50 largest cities. For example, San Francisco, Seattle, and Austin are all ranked in the bottom half of that list of 50 when measuring download and upload speeds, plus overall video experience.

Across all 50 states, the report continues, smartphone users experienced download speeds that range from 12.1 Mbps in Mississippi to 32.9 Mbps in New Jersey. States with the fastest speeds are mostly concentrated in the mid-Atlantic and New England regions, while the two fastest cities are Cleveland and Minneapolis, according to the report. There’s also a wide divergence in speeds between the top and bottom of that list of 50 cities, with the fastest cities offering speeds that are almost twice as fast as Oklahoma City, which ranks at the bottom.

High upload speeds in New York and Salt Lake City mean you’ll have the best experience there when sharing smartphone photos and videos. Interestingly, Los Angeles (the home of Hollywood) comes in at a middling 30th place when ranked for mobile video experience.

5G offers significant promise in these areas, but, of course, it will still be a while longer before most ordinary customers get to experience that level of connectivity. “In even the lowest-scoring US city for 4G availability,” Opensignal notes in the report, “smartphone users spend 94.7% of the time connected to 4G rather than older technologies such as 3G. Opensignal expects it will be years before smartphone users spend as much time connected to 5G networks as they do 4G networks and hence measures of 4G mobile experience such as 4G availability will continue to be important.”