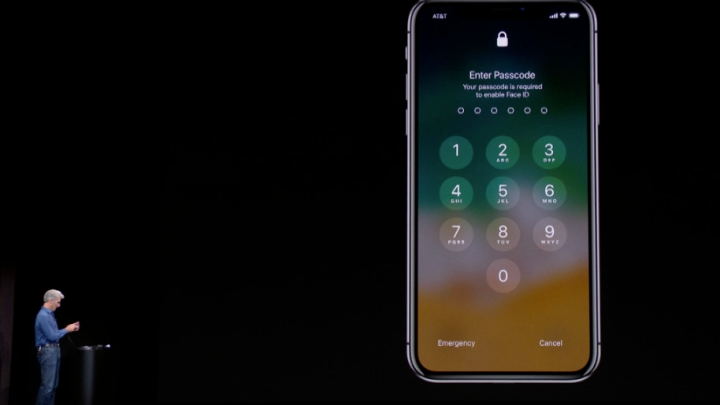 The iPhone X if officially Apples next top-of-the-line smartphone, and it makes some seriously radical changes to how users will actually interact with their iPhones. With no more home button, the device will instead rely on a new facial scanning biometric feature called Face ID. The technology behind it is complex, and Apple boasts that it’s incredibly secure and remarkably accurate. Naturally, if you’re replacing a system as widely-used as Touch ID, the system better work flawlessly. Unfortunately, when Apple’s Craig Federighi began the very first iPhone X live demo in front of a packed house and countless viewers watching online… it stumbled.

“Unlocking it is as easy as looking at it… and swiping up,” Federighi began his demo. That’s when things got a little weird. He swiped, and nothing happened. The screen went dark and then woke back up. “Let’s try that again,” the Apple exec said, staring at the phone and swiping once more. Instead of unlocking, the phone brought up the passcode screen, which is the fallback for whenever the biometric Touch ID feature fails to identify its user, and is presumably the same for Face ID.

“Woah… let’s go to backup here…” Federighi recovered. The entire venue was dead silent the entire time, which was a nice dramatic touch on the part of everyone in the crowd. “…and get right in.”

So, a couple of notes on this. First, the iPhone X didn’t just request a passcode, it also produced an error message that stated “Your passcode is required to enable Face ID.” A number of people on social media and tech news outlets have suggested that this was merely an error on the part of whoever prepped the phone, and that they didn’t unlock it before the demo. However, that error is the exact same one that pops up when you use the wrong finger for Touch ID and it fails multiple times. Try it on your iPhone right now and see.

It’s clear that Federighi attempted to unlock the phone with a swipe at least twice before the error popped up, so it’s pretty clear that this wasn’t a case of the phone having been restarted and then not unlocked — which, if that somehow was the case, would have been an incredible oversight on the part of Apple — but rather was a failure on the part of the Face ID unlock system itself.

It was a really unfortunate moment in an event that was surely rehearsed at length, and it didn’t paint Face ID in a particularly flattering light. The rest of the demo went off rather smoothly, with a nice showcase of the new animated emoji and augmented reality masks support made possible by the new facial detection system, so that was at least a plus.

Touch ID is the future of authentication for Apple, or at least that’s what we’ve been led to believe by what we saw on stage today. It’s probably safe to assume not everyone will deal with the issue that Apple experienced on stage today, but when you’re hoping to get consumers to abandon something as reliable and accurate as Touch ID has become, an on-stage failure is a pretty big deal.