As he is prone to do, Tesla CEO Elon Musk took to Twitter this week and clued us in on some new features coming to Tesla vehicles. Specifically, Musk fired off a tweet thanking Tesla owners across the globe for “taking a chance on a new company that all experts said would fail” before soliciting Tesla owners for suggestions on how the company can “improve further.”

Musk obviously didn’t have time to respond to every suggestion, but a tweet about incorporating automatic windshield wipers that dynamically change speed based on the amount of rain did catch Musk’s attention. Interestingly enough, Musk said that the feature would actually be “coming very soon.”

The Twitter exchange in question can be seen below:

Incidentally, automatic windshield wipers used to be enabled on older Tesla vehicles, but have been nowhere to be found since Tesla rolled out its second-gen Autopilot hardware in 2016. Since then, users have been clamoring for the feature to return with no official word from Tesla as to what was going on.

For what it’s worth, not every Tesla owner was a fan of automatic windshield wipers, but a quick perusing of posts on the Tesla Motor Club site reveals that the folks who did enjoy it really loved the feature.

It’s also worth mentioning that Musk confirmed Tesla’s plan to manufacture a pickup truck, though he did note it would only come after the company rolls out the Model Y, a crossover version of the Model 3. Musk, never a stranger to hyperbole, added that he is “dying to build it” while also teasing the inclusion of a “gamechanging” feature:

I promise that we will make a pickup truck right after Model Y. Have had the core design/engineering elements in my mind for almost 5 years. Am dying to build it.

Musk also noted that the size of the pickup truck would be similar to that of a Ford F-150, or possibly even bigger: 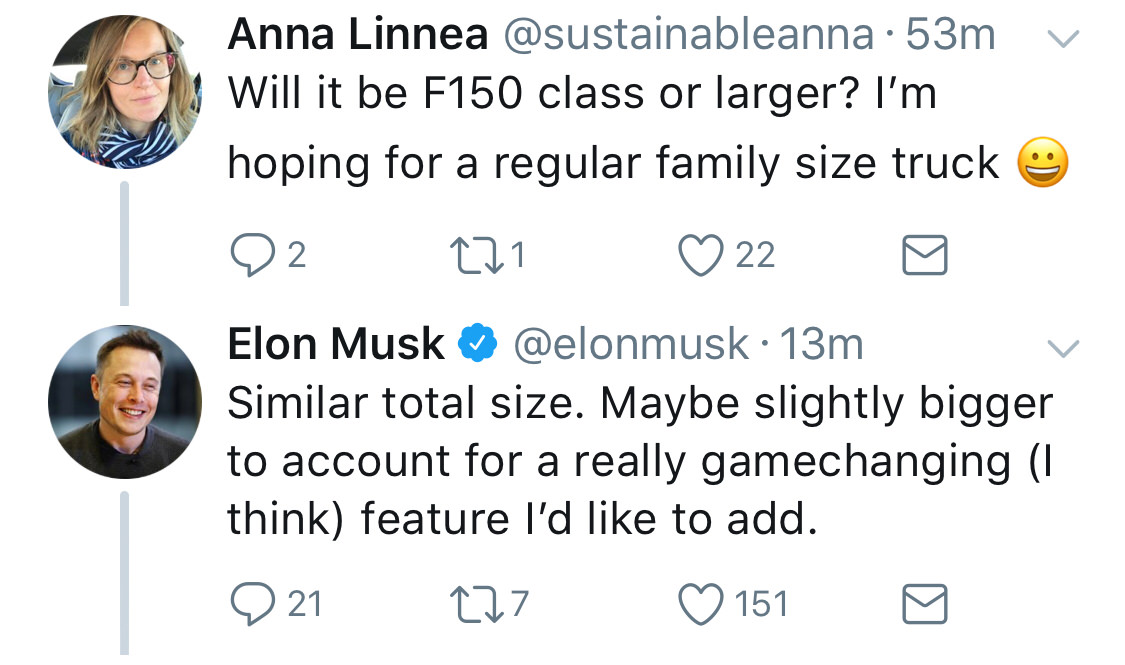