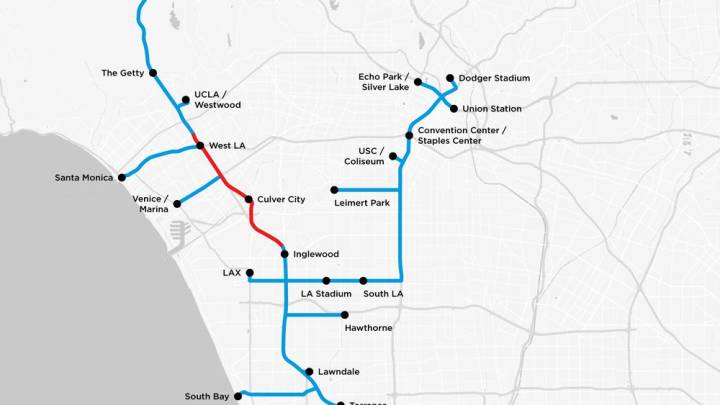 When Elon Musk first suggested that he wanted to solve LA’s traffic problems with a series of underground highways, most of us thought he’d spent a few too many late nights huffing rocket fuel. When he started digging a hole in the parking lot of SpaceX’s LA headquarters, I honestly believed he was prepping a nuclear bunker for the coming war.

But six months later, Musk’s Boring Company appears to have made real progress on its first test tunnel, which means we have to start taking Musk’s plans seriously. And if you look at this newly-published map of Musk’s proposed tunnel routes, you can see that he does intend to change LA’s infrastructure forever.

The Boring Company recently published a map on its website outlining where the tunnel network would initially go. The ambition of the project is clear: Musk is basically proposing to dig an entirely new subway system from scratch. The longest tunnel runs around 40 miles from the Sherman Oaks neighbourhood, through downtown, and ending at the Long Beach Airport. The main artery roughly traces the path of the 405 highway, with occasional branches going off to points of interest like Santa Monica.

The main north-south artery is complemented by a roughly east-west tunnel, connecting LAX with Dodger Stadium. SpaceX’s headquarters is neatly at the center of this in Hawthorne.

Musk plans on digging a 6.5-mile proof of concept tunnel — the part outlined in red — and using that to test all his systems before trying to dig out the rest of the tunnel network. Unlike conventional highway tunnels, Musk proposes that high-speed “sleds” carry cars through the underground system, rather than having cars drive themselves.