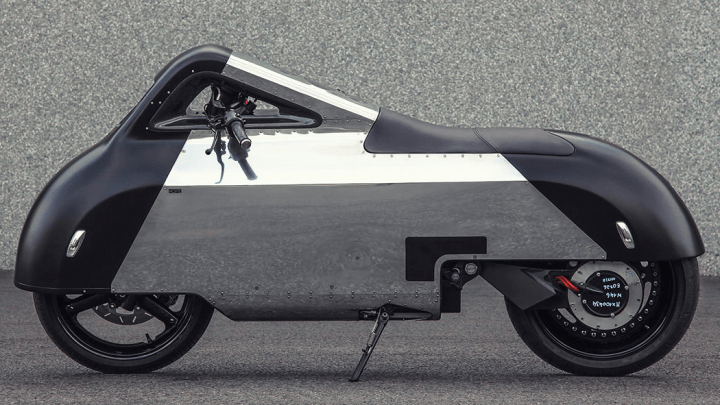 Recently, the one-of-a-kind ExoDyne electric motorcycle made motorheads drool thanks to its barely-there frame and impressive specs, but it seems having an excess of body can be equally eye-catching. This new all-electric two-wheel concept called “Hope” looks like it was pulled straight out of a Star Wars prop room, and its creator drew inspiration from a truly mind-boggling trio of pop culture icons.

Hope is built on a Vectrix VX-1 body, retaining the modest motor which is good for a top of of 75 miles per hour and a range in the neighborhood of 170 miles. What makes the bike unique is its incredibly smooth custom outer shell. Built of fiberglass and aluminum plates, it envelopes the entire bike and even arches over the handlebars.

Its creator, Samuel Aguiar, goes by the alias “Shiny Hammer,” and that nickname certainly seems to apply to Hope. Its metal paneling has a mirror-like finish, and Aguiar says the body is both light and strong thanks to the chosen materials. Hope also features upgraded brakes and wheels, along with a tweaked instrument cluster and custom lighting.

“I was looking for a design that you would want to hug, without any aggressive shapes,” Aguiar says “Like a blend between a pre-A Porsche 356, an iPhone and a Pokémon.”

That’s certainly an interesting trio from which to draw inspiration, but looking at the end result, it actually seems pretty fitting. As an electric vehicle, it’s also virtually silent, which makes it even more fun, according to its owner. “Being quiet, people look at it more than if it was noisy—and you can hear them talking about it, which is funny,” he says. “Riding the bike at night makes you feel like a ninja, which I love.”