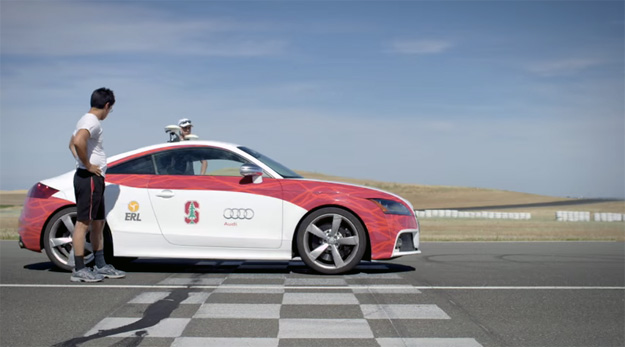 Self-driving cars are the future of transportation, and the future is almost here. Google has been testing driverless cars for years now with great success, and there are even towns that already use self-driving electric busses to cart people around. But do autonomous race cars take things too far? Is that really something we want to see?

OK fine, it’s pretty cool to see a driverless car tear up a racetrack at 120 MPH.

Engineers at Stanford University have created an autonomous car that we’ve discussed a few times here in the past. In fact, just over a year ago we watched as the researchers’ driverless Audi beat a real race car driver in a race for the first time ever. It was a truly impressive feat, and now the self-driving Audi has returned to the track in a new video.

As fun as it is to watch Stanford’s autonomous Audi TTS hit speeds in excess of 120 MPH though, mechanical engineering professor Chris Gerdes and his students are more interested in other aspects of the car’s track performance.

The full video is embedded below, and Stanford News’ report on the professor and how he’s using his self-driving car to make the roads safer can be seen here.