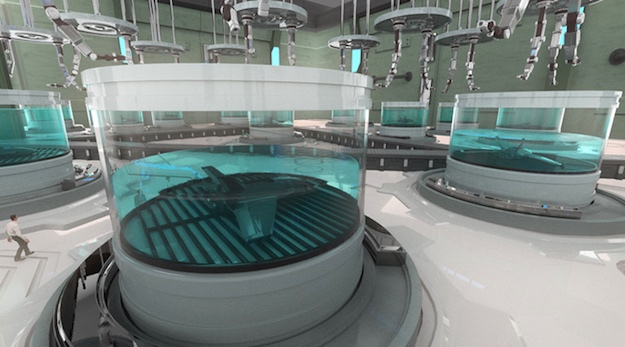 More often than not, some of the most cutting edge technology comes not from Silicon Valley, but from military companies and various branches of the armed forces. With generous budgets at their disposal, it’s hardly a surprise that grandiose research projects involving items like stealth motorcycles and drones that can both fly and swim are often rooted in military research.

That said, the following research initiative is a bit outlandish even for military standards. Over the past few days, word emerged that two military-backed defense companies based out of Scotland and England are currently working on technology that appears to be a wacky, futuristic and intriguing marriage between advanced chemistry and 3D printing.

The two companies involved are BAE Systems and Cronin Group PLC, and according to Defense Tech, the joint effort is geared towards developing technology that can grow unmanned aircraft and “some of their complex electronic systems, conceivably from a molecular level upwards,” all within a matter of weeks no less.

Does this sound crazy and exceptionally vague? Sure, but the research, no matter how ambitious and out-there it may be, is very real. The ability to quickly create uniquely capable miniaturized drones for mission-specific tasks would of course help military units undertake various missions when their current fleet of aircraft or drones are deemed either unsuitable for the task at hand or not at the ready.

And at the center of this research is a machine called Chemputer which, relying upon advanced chemical processes, would theoretically be able to grow armies of attack and surveillance drones.

Lee Cronin, founding scientific director at Cronin and also a professor at the University of Glasgow, said they have been developing means “to digitize synthetic and materials chemistry,” with the aim of assembling complex machines — inside a machine — “from the bottom up, or with minimal human assistance.”

The same technology also could be used to produce multi-functional parts for larger manned aircraft, he said, though BAE and Cronin appear to be promoting the futuristic alchemy as a means of producing small, customized and incredibly fast unmanned aerial vehicles.

“This is a very exciting time in the development of chemistry,” Cronin said on BAE’s website. “We have been developing routes to digitize synthetic and materials chemistry and at some point in the future hope to assemble complex objects in a machine from the bottom up, or with minimal human assistance. Creating small aircraft would be very challenging but I’m confident that creative thinking and convergent digital technologies will eventually lead to the digital programming of complex chemical and material systems.”

Again, this all sounds straight out of the realm of science fiction, and is evidenced further via the video below. Regardless, it’s still quite an intriguing research project to say the least.