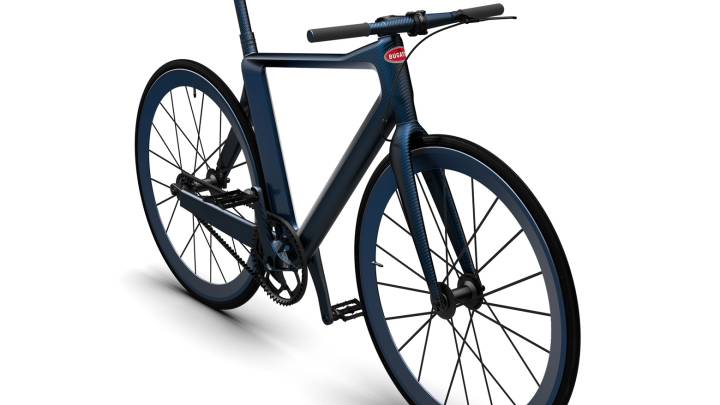 Having already conquered the road with its nearly 1,500 horsepower Chiron, Bugatti has seemingly decided to start spending its extremely valuable time working on other forms of conveyance. The company’s recent Chiron-inspired Niniette line of yachts is one of those projects, but at over $2 million it’s a pretty hard sell. The newest Bugatti spinoff isn’t nearly that expensive, and it’s not as absurdly decked out as a yacht or supercar, but you still probably won’t be able to afford it. It’s a bicycle, and it’s priced like an SUV.

Bugatti partnered with luxury bicycle manufacturer PG for the new road bike, and it’s not the first time the two have come together to release a bike with Bugatti branding. The bike is called simply the PG Bugatti Bike, and it shares a surprising amount of design language with the Chiron itself.

Like Bugatti’s supercars, the PG Bugatti Bike is built with generous helpings of carbon fiber. In fact, PG says that over 95% of the bike is carbon fiber, which helps keep the weight extremely low at less than 11 lbs. There’s also some other fancy technology built in, including a shock absorption bar and aerodynamic tubing.

There’s a couple of interesting — and even somewhat humorous — quirks about the bike, too, including the fact that you can have it customized to match your own Bugatti, which you definitely don’t have. You can add leather and special paint jobs as well, but even after you’ve customized the bike to your exact specifications, Bugatti says you shouldn’t actually ride it around town. Nope, the company notes that the bike “is a piece of sports equipment which is not intended to be used on public roads.” That’s a bit of a bummer, especially considering the previous PG Bugatti bicycle retailed at over $39,000. That’s an awful lot of money to spend on a bike you can’t ride around the block.