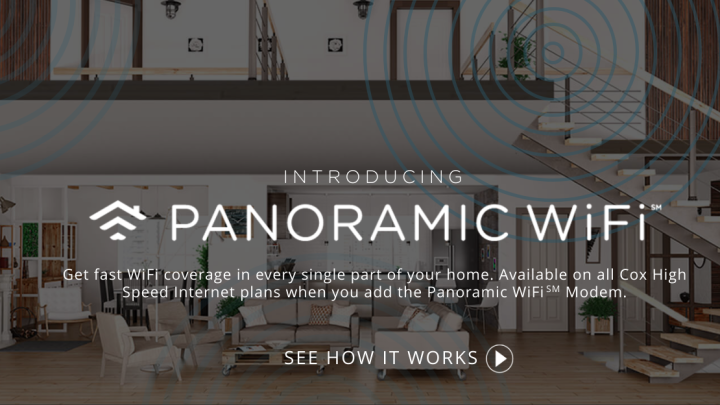 In a breathless press release this morning, Cox announced nationwide availability of its new Panoramic Wi-Fi Router. In theory, this should be a good thing: Cox’s new magic internet box is the fastest and best Wi-Fi router the company has ever offered, which means more customers should now be getting faster and more consistent internet.

But for some reason, Cox is still feeling the need to push the router on customers with a bunch of fake buzzwords and half-truths, ultimately trying to persuade customers who probably don’t know better that they need to rent a substandard device for an obscene monthly price, or face the consequences.

First, let’s talk about the router itself. There aren’t a ton of details available on Cox’s website, but it’s some kind of combo modem/router that combines the DOCSIS 3.0 cable modem with a 3×3 MIMO, 802.11ac Wi-Fi access point. Those specs are respectable, and probably enough for most people, but they were also standard on good Wi-Fi routers available in 2012. Right now, an equivalent (or better — Cox’s website doesn’t have a full list of specs) router will run you about $90.

But you wouldn’t know it from reading Cox’s marketing material. Apparently, the Panoramic Router is “Wi-Fi reimagined to blanket your home. Person to person. Device to device. Room to room. It’s a next generation WiFi experience, optimized specifically for each residence.”

The parts of that which aren’t meaningless are not really true. There is “next-gen Wi-Fi” available right now: it’s technology like Wave 2 4×4 MU-MIMO, which allows simultaneous connections to multiple clients with speeds up to 2.5Gbps, rather than the 1.3Mbps that Cox’s access point is probably capable of.

It’s not just the over-hyped hardware that’s bad here, either. The Panoramic Router costs $10 a month to rent, and there’s no option to buy. That means you’re spending $120 a year for the privilege of having Wi-Fi at home, and over the course of a couple years, you’re going to be paying far, far more than you should for a slowly-ageing router.

But don’t worry! Cox has an answer for why you need to rent, rather than buy, your modem: “The Panoramic WiFi Modem is only available for a monthly rental fee to our customers. This ensures that we have the capability to upgrade the software and firmware on these devices to add functionality and protect and manage devices connected to our network.”

You know who else has the capability to upgrade the software and firmware on devices on a regular basis? Every single other consumer electronics company out there. Apple has no problem upgrading two-year-old iPhones with the latest version of iOS, even though they’re owned and not rented. Ubiquiti, the company that makes my home Wi-Fi system, pushes out firmware upgrades twice a week.

To be clear: this isn’t a problem that’s unique to Cox, but rather a much bigger pattern of deceptive behaviour that cable companies across the nation engage in. The cable companies know that most people are lazy and unmotivated when it comes to home networks, so they’ve worked out that they can take any $100 piece of hardware, dress it up with the cutting-edge features of 2012, and rent it to you for $120 (plus taxes!) every year.

This isn’t news. It’s just depressing that it happens with such brazen consistency.