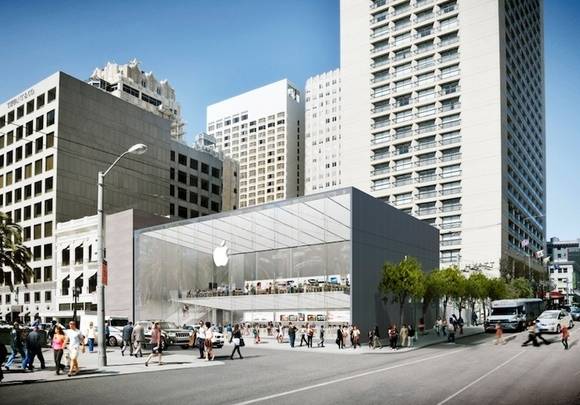 Yesterday, Apple unveiled the “future of retail” in its new San Francisco store. The new location is absurdly overhyped: it has “forums” and “groves” rather than aisles or counters, and Apple wants entrepreneurs to cluster in its “board rooms.”

It’s a far cry from the Apple Store that Steve Jobs first introduced back in 2001, and if the founder could see what the face of the store has become, he’d be turning in his grave.

The video above shows the store that Jobs designed. The focus is clear: the first thing that you saw when you walked into the building was Apple’s full line of products, divided between consumers and pro users. Simple, easy to understand, no showmanship — clean design letting the computers speak for themselves.

Let’s compare that to the first impression people will get of Apple’s new store:

Once inside, the trend continues. It’s going to be the same Apple store you know and love/hate, but with dumb names, because Apple is bigger than “stores.” Per The Verge‘s breathless coverage:

The Genius Bar, where can make an appointment to get hands-on customer service, is now the Genius Grove, accented by literal trees and open spaces. The company is also introducing what it calls “windows.” Located in “the avenue,” these are displays designed to change with the seasons and cycle through interactive themes, like iPhone photography, Apple Music, and iOS apps. Apple is hiring what it’s calling creative pros to stand at these stations and offer advice and tips depending on the theme.

Let’s remember what the Jobsian Apple store was supposed to be all about: showing off Apple products in a natural environment, and providing accessories, software and customer service to make that happen. But hey! Who’s got time for those things while you’re busy patting yourself on the back. Per iPhone design guru Jony Ive:

“It all starts with the storefront — taking transparency to a whole new level — where the building blends the inside and the outside, breaking down barriers and making it more egalitarian and accessible.”

There’s no doubting that Apple’s stores have been a huge success, generating more revenue per square foot than any other chain. It’s a phenomenon that every other company has been striving to copy, mostly unsuccessfully, and a huge part of creating the Apple Cult that queues outside stores worldwide on a yearly basis.

But the stores are also the public front of Apple, and the company seems to be taking itself a little seriously these days. Apple sells smartphones and laptops, devices that do genuinely change lives. But in the rush to make itself a “cornerstone of the community,” Apple has forgotten where the company came from.