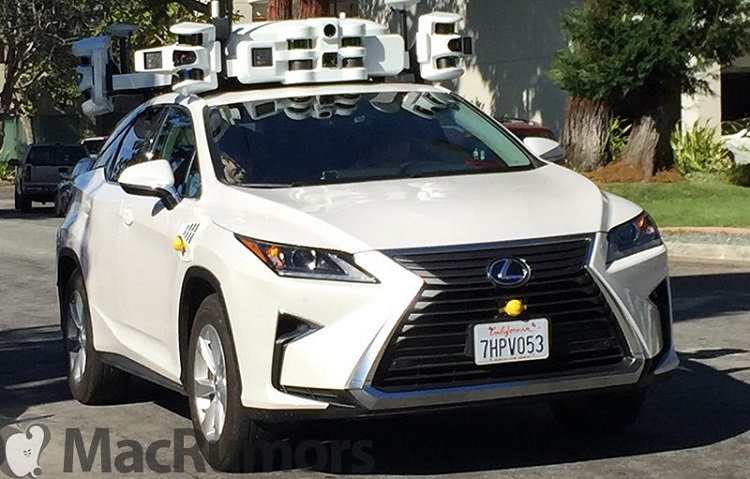 Rumors about Apple and self-driving cars have been flying since baby Jony Ive bought his first Hot Wheels car, but the company has been impressively secretive about any projects, at least in public. The closest we’ve come to an admission that Apple has a self-driving project was a permit from the California DMV to allow Apple to test self-driving technologies on the road.

But out of the public eye, we’re pretty sure that Apple’s been working on, well, something. There’s a secretive division named “Project Titan,” which is allegedly using Lexus SUVs as the testbed for autonomous driving systems. Unlike Google’s self-driving cars, which routinely patrol the streets near Google’s HQ, the Project Titan cars don’t have much of a public profile.

So when a new video emerges with details about Apple’s self-driving testbed, it’s hard not to get excited. This video was taken by MacCallister Higgins, the founder of self-driving car startup Voyage, so he knows what he’s talking about.

Going to need more than 140 characters to go over 🍎's Project Titan. I call it "The Thing" pic.twitter.com/sLDJd7iYSa

In the video, what you can clearly see is a Lexus SUV with an ungodly number of sensors on top. In particular, you’re looking at six Velodyne-made LIDAR units, at least two radars, and a bunch of cameras. It’s a lot of sensor power, especially compared with the rather pedestrian radar-and-camera array that Tesla says will be enough for full self-driving capability.

It’s also interesting to see how the sensors are encased and mounted. Most test-bed self-driving cars strap the sensors on with ratchet straps and call it a day, but there’s something very Apple about the way this array is housed in white plastic and mounted to the roof.

The Verge also suggests that the computing stack is in the roof sensor array, rather than in a computer mounted somewhere in the vehicle body. That would make sense: Apple has hinted that it’s only working on the tech side of self-driving systems, rather than trying to make a complete self-driving car. Making a bolt-on system that includes all the sensors and computing power needed to make a car self-driving would make sense, if Apple’s aim is to sell the system to as many car manufacturers as possible.