While Apple News struggles, Flipboard tests its biggest change ever 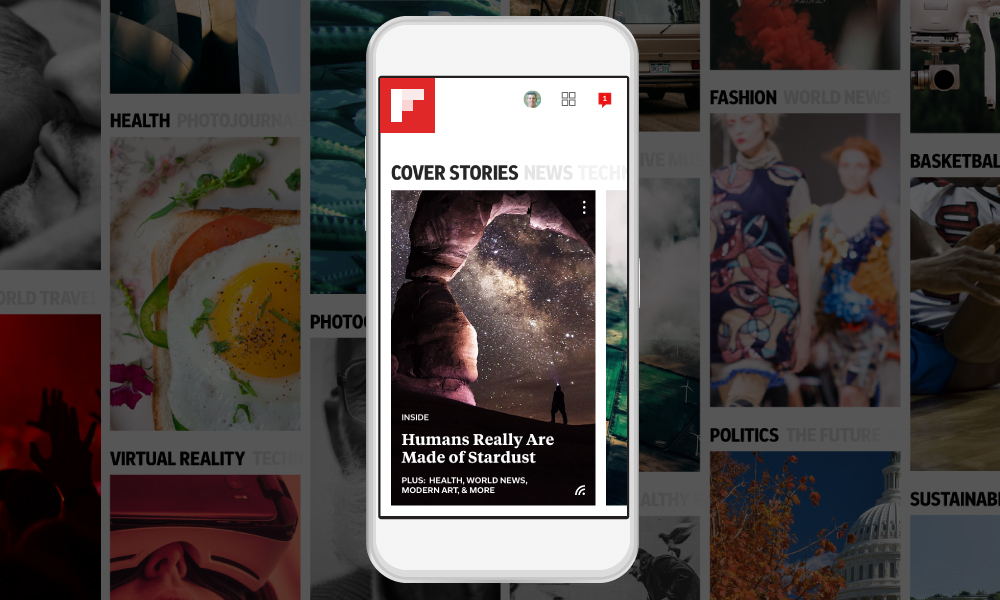 Flipboard has unveiled a new "Storyboard" curation feature that makes keeping up with news and other passions you have even easier through the app. Image source: Flipboard

If you caught the headlines on Tuesday about the departure of the head of business for Apple’s news app, which added a paid tier last year and is trying to convince people to pay $10/month as part of the iPhone maker’s deeper push into subscription products, it might have left a certain impression with you that perhaps the push to get people to pay for news remains a fool’s errand. M.G. Siegler over at 500ish certainly seems to think so. “Apple, Just Bundle News+ Already” reads the title of his post from Tuesday about this news, referring to the rumor that Apple is exploring a mega-bungle of its subscription products that would tack on Apple News+ a la the way Prime Video is a free add-on for anyone who pays for Amazon Prime.

This all stems from a Bloomberg report that Liz Schimel, the former international business president at Conde Nast, is stepping down as the head of Apple News+ less than a year after the app’s addition of the paid tier. As part of her remit, she managed the crucial relationships between Apple News and advertisers (as well as the news publishers that Apple wants to join the app), and her departure has led to much tut-tutting about the future of Apple’s effort here and whether or not it’s doomed. Meanwhile, there’s a related story unfolding and not really being talked about as much that’s flown under the radar of the news about Apple News, and it concerns perhaps the strongest rival to Apple in this regard. We’re referring to Flipboard, which is enjoying a much different story at the moment compared to the news app from Apple that might once have seemed like an existential threat.

In fact, while Apple News continues to struggle to find its footing, Flipboard is currently testing the biggest change it’s ever made in the app’s 10-year history. A change that has to do with that first syllable in the app’s name.

I’m running Flipboard on iOS, and if you go into the app’s settings menu, right there at the very top you should see an on/off toggle labeled “New Flipboard Design.” Turn that on, and voila — the “flip” design instantly goes away. The design mechanic you’re provided with instead is the all-too-familiar vertical scroll, which allows you to just keep flicking your finger upwards and making your way down through all your content.

That’s a pretty big change to test (and it’s very much a test, not a sign of a set-in-stone change to come) and it also happens to coincide with this year being the 10th anniversary of the app’s launch. Flipboard CEO Mike McCue assured BGR in a phone interview that the “flip” is not going away — that it’s a signature element of the app, and plenty of people still love it. We’ll get into what he said about what’s going on here in a second, but first, it’s probably worth sharing the text of an email Flipboard has been sending out to alert users to this beta design being tested:

We’d like you to try a new way to experience Flipboard that we have been experimenting with. In the coming days, you will see a message pop up inside your Flipboard app (or you may have seen it already) that asks you to try out a beta with a new design.

People occasionally ask us why Flipboard flips rather than scrolls. For you the answer may be obvious: one simple gesture moves you easily to a whole new screen full of content. The flip is the modern day equivalent of the printed page and it creates beautiful, full screen layouts that make Flipboard a joy to flip through.

We have long sought a solution which could couple the beauty and ease of the flip with the pervasiveness of the scroll. After a year of research and testing, we landed on a new mode inspired by both the flip and the scroll. It is something different from today’s flip that we’d like you to try.

If you haven’t yet seen the prompt, below are instructions for how to turn the beta design on. It is still a very early version, but we hope you are open to trying it out. And don’t worry, the flip is not going away. You can easily switch between both navigation modes by going to your settings (tap the gear icon on your profile page.)

Thanks for your support,

Before I get into what Mike told me, I want to say something right off the bat  — I absolutely love the new design. A scroll allows users to get through lots of content quickly, whether you’re inside Twitter, Facebook, even Apple News or tons of other applications. I’ve loved and used Flipboard since the beginning, but if you twisted my arm and forced me to point to one thing I wished I could change, it would be the limitations associated with the “flip.” To be more specific, that movement only lets you work through one piece of content, which takes over your whole screen, at a time. When you’ve got lots you want to get through, one-by-one can feel slightly cumbersome and limiting.

Not so, in my opinion, with this new scroll that Flipboard is testing. You can make your way through everything a good bit faster, while still experiencing a similar Flipboard feel.

Of course, that begs the question, why test this at all, and why now? By the way, this isn’t even the only news to come out of Flipboard right now, either — the service also in recent days announced the launch of curated packages of local content from 23 major metro areas across North America.

The first 23 Local sections (including cities like Atlanta, Austin, Boston, and Chicago, among others) will be featured in the app’s Explore Tab. And those sections will include content from local news organizations, such as newspapers, TV stations, radio stations, college news sites and blogs, that share their stories on Flipboard. All at a time, of course, when a greater prominence is being placed on saving local news around the country, something that doesn’t enjoy the same support mechanisms as a national publication like The New York Times, with its broad subscriber base.

“The flip was a very important breakthrough for us” in the early days, McCue told BGR. “It was important for us to figure out how to help users navigate content efficiently and in a highly immersive way. What I mean is edge-to-edge, screen-to-screen, navigation through content. And in the early days, we took a huge amount of design cues from the world of print, so full-bleed images, maps, different fonts — and everything is different, page-by-page. Which also creates the opportunity for full-page advertising.”

As we said, and it’s worth stressing again, none of that is going away anytime soon (“One lesson I’ve learned over the years is you don’t want to force your users into using your product a certain way when they’ve been using it a different way”). It’s more about — A) scrolling is an incredibly popular way to use apps like this, but also B) Flipboard actually offers a few different user experiences already, depending on where you’re using the service.

If you open Flipboard on the web, you scroll through content. On the mobile apps now, you flip, but if you click on a piece of content and want to jump into a news story, a new page opens up and you’ll be scrolling through the one.

The scroll that Flipboard is currently testing is also an interesting tweak of the mechanic that they’ve settled on to try. It’s not a pure vertical scroll, where you can swipe up and watch a selection of content swirl past you. If you do a gentle tug, the next single piece of content will snap into place. “With a perfect scroll,” McCue explains, “Content is always kind of ‘off.’ So you’ve got this beautiful creative and this gorgeous art, and for one brief shining moment it lines up (in your view), but then you might see content peeking up” from the next source that wants to make its way into your field of view.

Try it now if you want to see how you feel about the change. But, again, this is an opt-in strategy, and if you want to keep flipping, Flipboard is more than happy to let you do that.

“The default is we’ll keep the flip around for the foreseeable future,” McCue says. “I don’t want to force a totally different navigation model on people.” Flipboard is actually tied with Twitter in terms of the largest drivers of traffic on the internet, he continues. This test is about trying to get a better handle around the fact that too many times people click out of a flipping environment that takes them into a scrolling environment, but McCue cautions: “I also don’t want to create a holistic experience that walks away from idea of beauty and edge-to-edge immersiveness that you get with a flip.”

All of which is to say, keep an eye on this scrappy competitor to Apple News, because even now, 10 years on, “We’re just getting warmed up.”