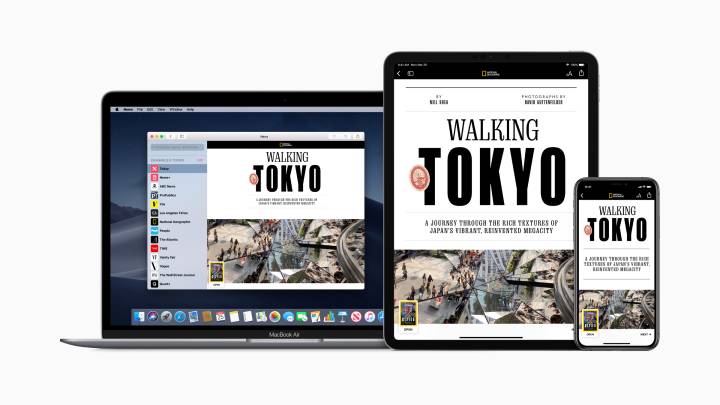 Apple’s “show time” event kicked off at 10 AM PT / 1 PM ET today, and Tim Cook has taken the stage. While we are excited to see what Apple has in store for the world of streaming entertainment, the first announcement today is about Apple News. As expected, Apple is making use of its acquisition of Texture’s magazine subscription service and add magazines to its new service, which it has dubbed Apple News+.

Over 300 magazines will be featured in Apple News+, such as National Geographic, The New Yorker, and Vanity Fair, and more. In addition to magazines, the service will also feature some of the world’s top newspapers, including the Los Angeles Times and The Wall Street Journal. Apple News+ will cost $9.99/month.

All of the premium content can be found in the new News+ tab, which lives at the bottom of the Apple News app. You can save your favorite magazines as well, so that you won’t ever miss a new issue. Apple also showed off covers with moving images, and demonstrated how the magazines have been successfully ported to both the small screen of the iPhone and the larger display of the iPad. Apple also announced that it will not share demographic or subscriber information with publishers, which explains why some major names didn’t make the cut.

As Apple explained during its keynote, it would cost more than $8,000 to subscribes every magazine and newspaper in Apple News+ separately. This is “the only place” where you can pay for access to all of them, plus, you can share your subscription with your family, so you won’t all have to pay for your own accounts. And the first month is free. Apple News+ will be available in the US and Canada first, and reach Australia and the UK in the fall.

If you want to try out Apple News+, you’ll be able to do so later today after an iOS update rolls out.