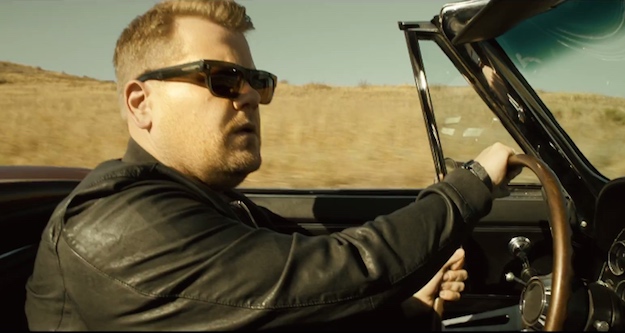 Apple late on Sunday rolled out a brand new commercial designed to spread the word about Apple Music and the streaming service’s vast collection of 40 million songs. The commercial is arguably one of the best Apple ads we’ve seen in some time as it cleverly hits all the important Apple Music selling points while also delivering some bona fide laughs.

The commercial stars James Corden and features Apple executives Jimmy Iovine, Eddy Cue and Bozoma Saint John brainstorming ideas during an ad meeting. The premise is essentially consists of Corden coming up with wild, outlandish and hilariously grandiose ideas to help inform users about the benefits of Apple Music.

More often than not, big corporations attempting to do funny is a recipe for disaster, something Microsoft knows all too well. But this Apple Music ad is actually the real deal, and hopefully Apple gives it the broadcast air-time it deserves because, let’s face it, Apple Music for as well as it’s doing is still getting lapped by Spotify.

Apple’s latest ad can be seen below.

Personally, my favorite bit is this one: I’m driving. In a convertible. Through the desert. I see a small boy. I look at him. He looks at me. He says, “I’m thirsty.” I say, “Thirsty for new music?” and I hand him an iPhone.

The commercial also makes a point of touting Apple Music’s expertly curated playlists tailored for each particular user’s specific tastes. The tagline appropriately reads in part, “The best way to experience all the music you love—even offline. Over 40 million songs. Thousands of handpicked playlists. Exclusive music and video premieres.”

All in all, an A+ effort. Now there’s just the small matter of improving Apple Music’s UI.

Now as far what Apple commercial might give the one above a run for its money, this one featuring Kobe Bryant and Michael B. Jordan of Friday Night Lights fame comes pretty close.