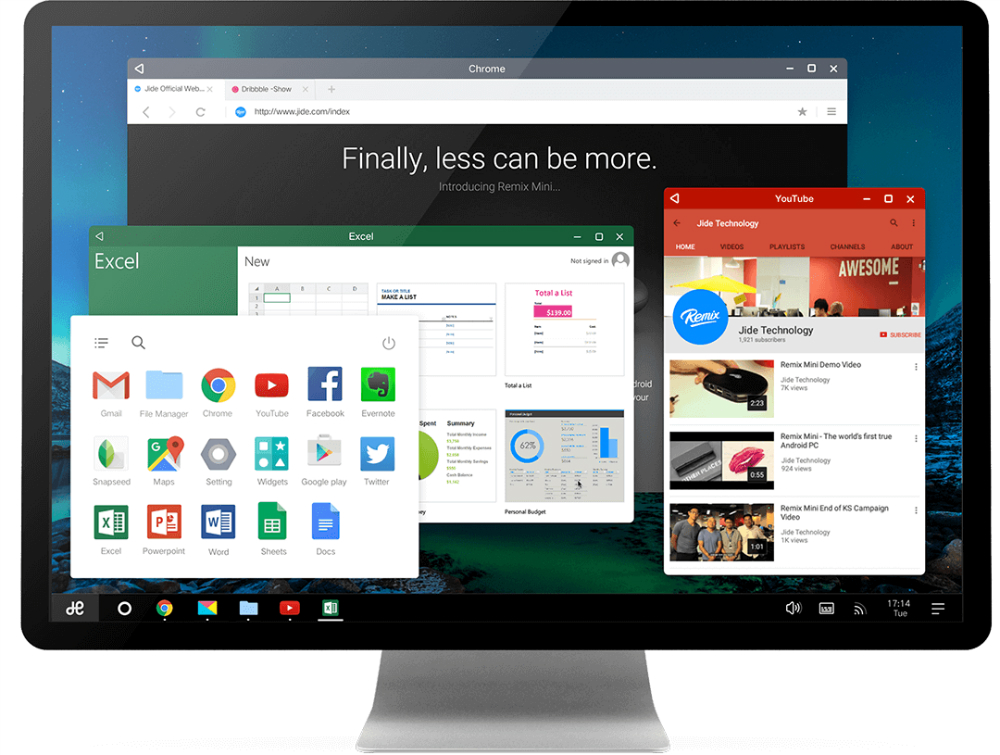 Not too long ago we told you there’s a way to breath new life into your dying Mac or PC by turning them into Chromebooks. But there’s now an even better trick out there and it involves using Android to save your old, slow Mac or Windows computer.

What good would a touch-based version of Android do to a device that doesn’t have a touchscreen? Not much, but then again your computer won’t be running the same Android build you use on your Android smartphone or tablet. Instead, we’re looking at Jide’s Remix OS for PC, which released a major new announcement at MWC 2016. And don’t worry, it comes complete with support for Google Play store, which means most of your apps will still work.

DON’T MISS: The new Sony smart toys that will save us from our screens

The company said that a beta version of Remix OS will be available on March 1st, following the public alpha release in January, complete with a new dual-boot support that will let you run both Android and OS X or Windows on the same machine. Best of all, Jide is now going to let users turn old 32-bit PCs into Android computers that run PC-optimized versions of Android, complete with multitasking capabilities (think a Windows-like user interface), access to an advanced file manager, and support for mouse and keyboard.

Additionally, the beta release fixes more than 50 major bugs, brings UEFI support, and support for over-the-air updates in the future. That should be enough to help you turn any PC into an Android device that’ll perform nearly similar to your Android smartphone or tablet. You’ll find instructions on how to install Remix OS on your machine at this link, and Jide’s full press release is available below.

February 22, 2016 (Barcelona) – Jide Technology today announces the availability of Remix OS for PC Beta – the productivity-oriented version of Android, following the hugely popular Alpha release in January. The new Beta version has a substantial number of bug fixes and an increase in device compatibility, as well as over-the-air (OTA) updates, 32-bit system support and dual boot support through a new hard drive installer tool. The new release will be publically available to download from the Jide website on March 1st.

Remix OS for PC allows users to freely download and install Remix OS, the best experience of both mobile and PC, onto the majority of Intel/AMD-powered machines. For the first time in Android, Remix OS brings PC productivity features such as multiple floating windows, advanced file manager, and true mouse and keyboard support to the Android app ecosystem. Remix OS allows users to run your Android apps and games such as Clash of Clans, Microsoft Word, and Facebook with the added power of your MacBook or old Windows machine.

David Ko, Co-Founder of Jide Technology, explains: “Thanks to the support and feedback from our generous community, we’ve been able to speed up the development of the Beta version. Now with OTA software update support, users can begin to rely on Remix OS for more daily activities without the worry of a new update wiping their data. This update will help us to charge towards the eventual stable release later in 2016.”

Following a clear demand, Jide has been working on providing compatibility for older, 32-bit computer systems, and is happy to announce it has been implemented with the release of Remix OS for PC Beta. A vast number of computers that still run 32-bit processors can now be given a new life with a lightweight Android-powered OS. This capability has exciting prospects particularly in developing markets where consumers are unlikely to regularly upgrade their hardware; Remix OS provides users a modern and versatile PC desktop experience to as many people as possible.

As Jide has championed a brand new way of experiencing Android, Google Play Services and the Play Store will not currently be pre-installed on Remix OS. This is while Google takes the time they need to test the new operating environment. Users of the Beta version will be able to sideload Google Play Services by following instructions found on the Jide website.

Natural Collaboration
Remix OS for PC has been made possible thanks to a deep collaboration with the Android-x86 project. The community-favorite project has worked hard for years to bring the Android experience to traditional Intel-based computers. Combining their work with Jide’s Remix OS has opened up a whole new world to Android fans and users. This partnership is long-term and both parties will work together to improve the Android on PC experience in the years to come.