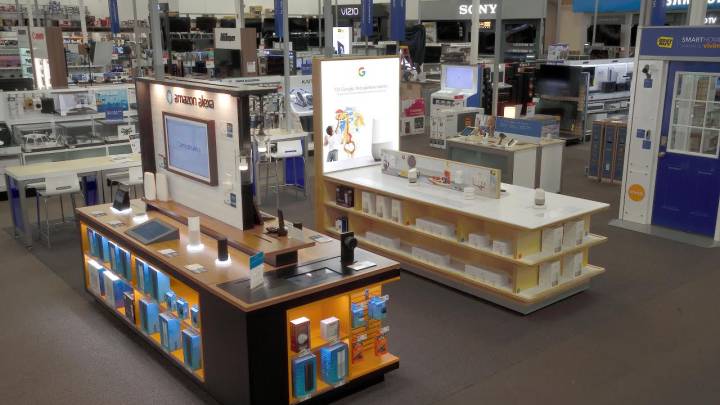 Intelligent voice-activated assistants for the home are in fashion right now, but how do you choose the right one if you’re not that tech-savvy? Do you even need a Siri-like voice assistant at home? What is it really good for? If the internet can’t already answer the questions you might have about Amazon Echo, Google Home, Apple HomePod, and many others, then you should hit a Best Buy store near you shortly.

Best Buy partnered with Amazon and Google to deploy Amazon Echo and Google Home experiences in some 700 Best Buy locations nationwide. They’ll be located near the smart home department, and trained personnel will demo these products as well as other gadgets that could smarten up your home.

As you can see in the image above, Amazon and Google will each get their dedicated space in the Best Buy stores. From the looks of it, Amazon might be the winner of a first impressions contest. That’s only because Amazon released a variety of Echo products to date — Echo, Echo Show, Dot, and Tap will be on display, while Google only has one Home device.

However, these gadgets all work with other home gadgets that can be activated via voice with the help of one of the two assistants. Other smart home products will also be featured, including Nest and Ecobee thermostats, Philips Hue lighting, Insignia Smart Plug, and Arlo cameras.

Will Apple’s HomePod receive similar treatment when it hits stores later this year? Best Buy told BGR It’s too early to say at this point.

The first Amazon Alexa and Google Home experiences should appear in select Best Buy stores next month, and the rollout will be complete by the end of the year.