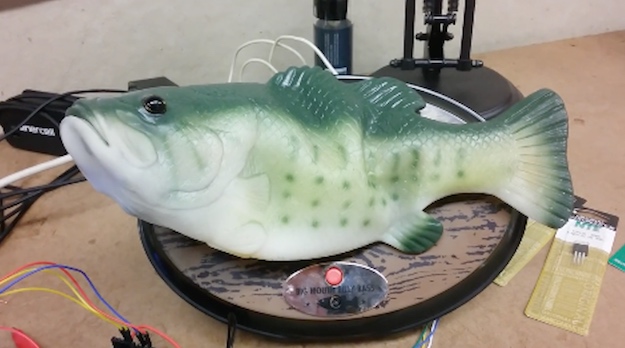 Delivered just a few days before Halloween, a developer named Brian Kane last week modified his Amazon Echo by replacing the device’s sleek outer shell with a Big Mouth Billy Bass, one of those singing wall-mounted fishes that became a fad for a hot second many years back.

The end result is a concoction that toes the line between brilliant and creepy. In a video posted to Facebook — and appropriately titled The Future — we see Alexa handling her queries with ease, albeit in the form of a benign bass.

If this is what the future looks like, I think it’s alright to hold onto the present for as long as we can.

Over the last few days, video of this all-knowing fish began spreading across the web like wildfire. As it stands now, it’s already been viewed more than 1.3 million times since going live just about 11 days ago.

As for how this bizarre being came to be, Mashable managed to get in touch with Kane who explained that he used Arduino to bring his project to life.

“This piece was an in-class demo to show the students how to rapid prototype a concept and get it working quickly, so that we can test new ideas on people and make decisions,” Kane explained in a statement. “We’re looking at AI as artists and designers, making new experiences and using the design process to find out what life can be like in a world of intelligent machines.”