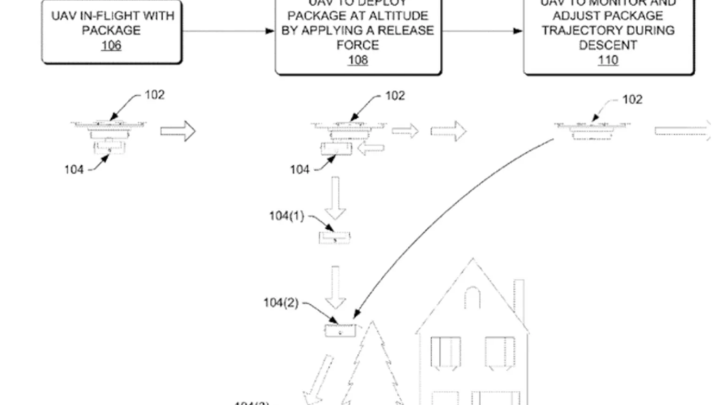 While America’s drones conduct aerial warfare overseas, Amazon is planning to rain down a very different kind of munition on American consumers. Plans for Amazon’s Prime Air drone delivery service have been in the wild for years now, but a new patent filing sheds light on one way Amazon could get your deliveries physically onto your doorstep.

The patent filing shows Amazon’s drones dropping packages from the air into a yard, rather than landing and placing the package. The idea is that drones in the air don’t pose much of a risk to consumers, but a drone trying to land might slice up your flowers, or the family dog.

Yes, dropping packages from the sky does present other problems, like your weekly delivery of dish soap crushing a small toddler. So to try and solve that issue, Amazon’s patent filing has the drone tracking the package after dropping, and using parachutes and air thrusters to gently but firmly guide the package to the desired dropoff spot. Basically, it’s like the supply drops in old Call of Duty games, but full of pens rather than a UAV.

As with every patent filing, there’s no guarantee whatsoever that this idea will become reality, but it does provide some insight into the ever-fertile minds of Jeff Bezos’s drone delivery team.

Prime Air is Amazon’s well-branded but not-yet-existent drone delivery service. It relies on autonomous drones flying your packages the last few miles from a warehouse to your house. Laws in the US (not to mention your shotgun-toting neighbor) don’t make it possible at the moment, but a very limited trial is already running in the UK.