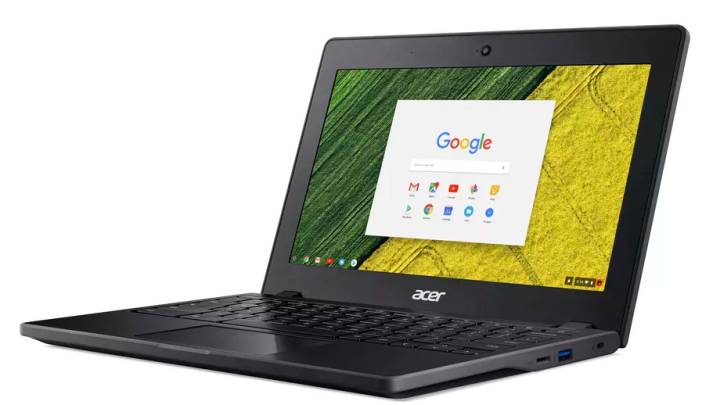 Just in time for everyone’s least favorite shopping season, Acer has released a new back-to-school Chromebook. The Acer 11 C771 might look black and businesslike on the outside, but a careful reading of the specs sheet hints that Acer is driving the cost of a usable laptop lower and lower.

The C771 has solid specs: for $279.99, you get an Intel Celeron processor (rather than the no-brand chips most cheap Chromebooks come with) a usable 4GB of RAM, and a matte black finish that looks an awful lot like Lenovo’s old business ThinkPads.

The attention to detail is where this really shines. Acer has made it ruggidized, which supposedly means it can take 132 pounds of pressure without cracking, and withstand dust and light spills. It’s all meant to make it survive a harsh life in a backpack being lugged around campus, but it’s just as good for a home computer if you’re not the most careful.

The ports also look excellent — two USB-A, one USB-C, and a full-sized HDMI that’s perfect for connecting to external displays or your TV.

This isn’t Acer’s first foray into good Chromebooks. The Chromebook R13 is Acer’s current flagship, and for $400 you get a laptop that’s better in every way than the Windows machines you’ll find for $850 at your local Best Buy.

The new Chromebook, the C771, doesn’t challenge the R13 for Acer’s top-of-the-line crown. But it does take most of the same specs and features that made the R13 good, and put them into a $280 laptop. There’s also a touchscreen version that runs $330, but comes at the expense of a hit to battery life.