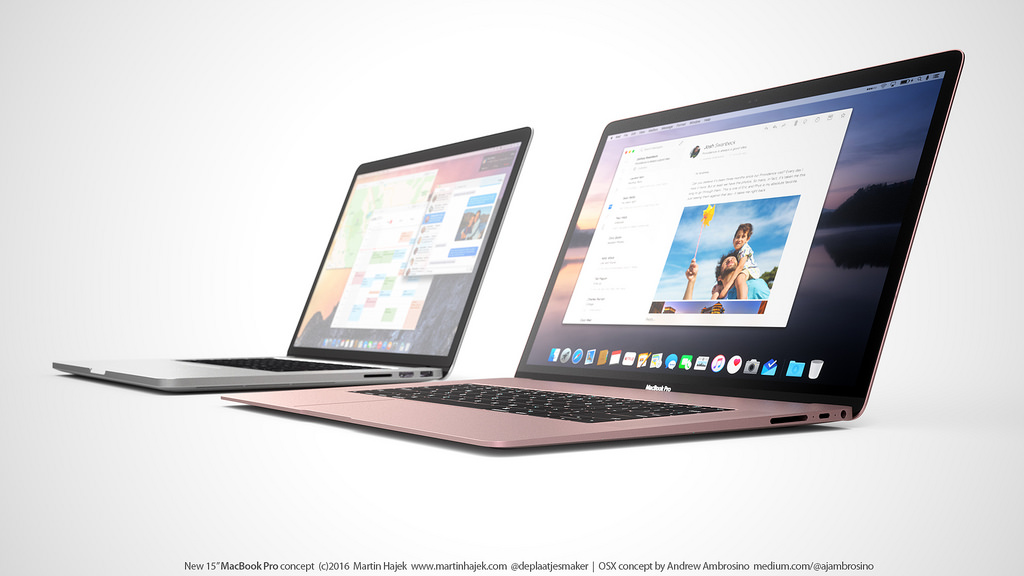 Apple last year amazed the world with an incredibly thin new MacBook design. The all-metal 12-inch Retina MacBook comes with various technical advancements that allowed Apple to make a thinner laptop than ever before. Rumors now say that Apple will take the same design and apply it to bigger laptops this year. The company will reportedly soon launch 13-inch and 15-inch notebooks that will be included either in the MacBook, Air or Pro families.

While there aren’t any leaks to show us what a 15-inch ultra-slim MacBook might look like, graphic designer Martin Hajek’s got us covered.

Hajek, who’s no stranger to creating concept imagery based on unreleased Apple products, imagined what an ultraportable MacBook Pro would look like with a 15-inch display. Borrowing design lines and angles from the 12-inch Retina MacBook, an iPhone-like rose gold hue, and port arrangement from existing 15-inch MacBook Pro, Hajek’s concept shows us the somewhat likely future of the MacBook.

What’s immediately obvious from Hajek’s renders is that the designer thinks Apple could replace all ports on the MacBook Pro with multipurpose USB-C ports that can handle battery charging and fast data transfer speeds. Hajek kept in the SD card slot and the 3.5mm headphone jack in his design, though.

The keyboard is also similar to the one on the 12-inch model, being a crucial design element that allows Apple to create such slim laptops.

Apple is expected to launch new MacBooks sometime in the second quarter so until then, check out Hajek’s extremely detailed renders of what an ultra-slim 15-inch Retina MacBook Pro might look like.