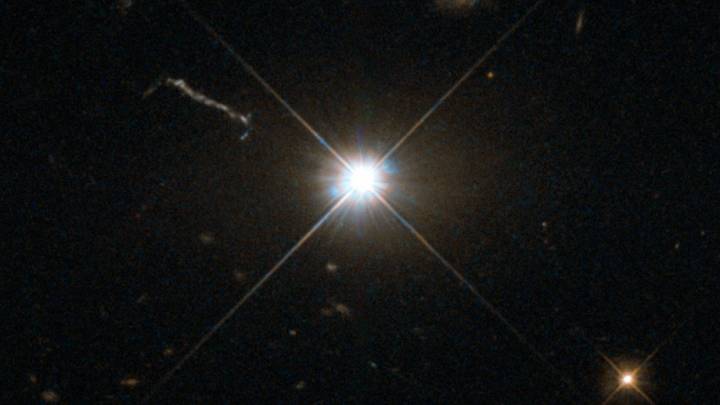 Scientists at the Australian National University have discovered the Universe’s fastest-growing black hole, a monster that gobbles up a mass the same size as Earth’s Sun once every two days. The black hole, which appeared to have the mass of 20 billion suns at the time its light was emitted, is growing by around one percent every million years.

The black hole is so far away that the light the astronomers measured was emitted around 12 billion years ago, during the earliest days of the Universe. “We don’t know how this one grew so large, so quickly in the early days of the Universe,” said Dr Christian Wolf from the ANU Research School of Astronomy and Astrophysics.

We’re lucky that the black hole is billions of light-years away, or the radiation emitted would destroy any life in our galaxy. “If this monster was at the centre of the Milky Way it would likely make life on Earth impossible with the huge amounts of x-rays emanating from it,” Dr Wolf said in a release.

The black hole was first detected as near-infrared light by Dr Wolf and his colleagues using the SkyMapper telescope at ANU’s Siding Spring Observatory. From there, the team used data from the European Space Agency’s Gaia satellite to confirm that the object was stationary, meaning it was very far away and possibly a black hole. They then used a spectrograph on the ANU’s 2.3 meter telescope to analyse the light. Their findings are presented in a paper here.