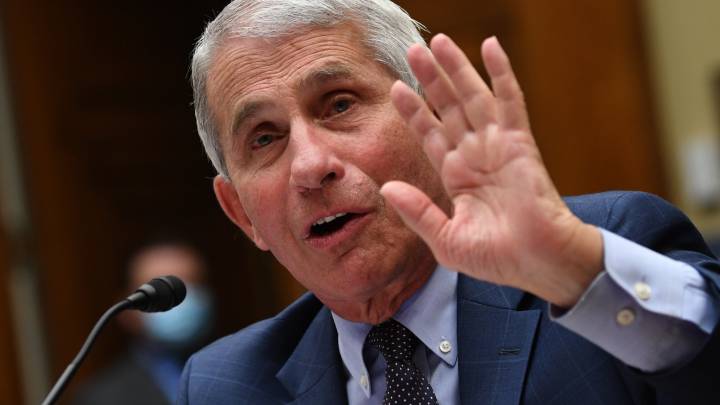 Dr. Anthony Fauci has been on the receiving end of countless jabs and thinly veiled attacks from President Trump over the past few months. Most recently, Trump called Fauci a “disaster” and implied that he’d be open to firing him if it wouldn’t be tantamount to political suicide.

Put simply, Trump likes to give off the impression that the coronavirus in the U.S. is under control, and Fauci’s candid remarks about the coronavirus tend to undermine Trump in that regard.

Fauci over the past few months has largely taken Trump’s personal attacks in stride. And while Fauci during a recent interview with CNN said that Trump’s remarks don’t bother him, it’s becoming apparent that he’s quickly losing his patience for Trump’s antics, if only because Trump’s remarks undermine the credibility of public health agencies.

When asked directly about Trump’s personal attacks and whether or not he thinks Trump is trying to get him to quit, Fauci responded:

I don’t think so. I don’t pay attention to that kind of thing. And I have the ability that I had for a long time to just focus like a laser on what I need to do. And my job, through vaccines, through therapies, and through public health measures, is to safeguard the health, the safety, and the welfare of the American public.

That’s all I concentrate on. These other kinds of things, though people may find it difficult to believe, are mere distractions. They don’t bother me. I know what my job is. And I’ve got to do it. And I’m going to do it. So that kind of, whatever you want to call it, it’s just noise.

Fauci’s response was certainly diplomatic, but it’s fairly clear that he’s fed up with Trump’s “noise” on the subject.

Earlier this month, Fauci got into it with the Trump administration after a Trump campaign ad used a quote of his out of context. The ad implied that Fauci said the following about Trump’s response to the coronavirus: “I can’t imagine that anybody could be doing more.” In reality, Fauci made the comments in regards to people working at public health agencies.

“I have never, either directly or indirectly, endorsed a political candidate,” Fauci said in response. “And to take a completely out of context statement and put it in which is obviously a political campaign ad, I thought was really very disappointing.”

Following that, Trump said Fauci was a “Democrat” while later adding that Fauci has been “around for 500 years” and lumping him in with other health officials he said were “idiots.”