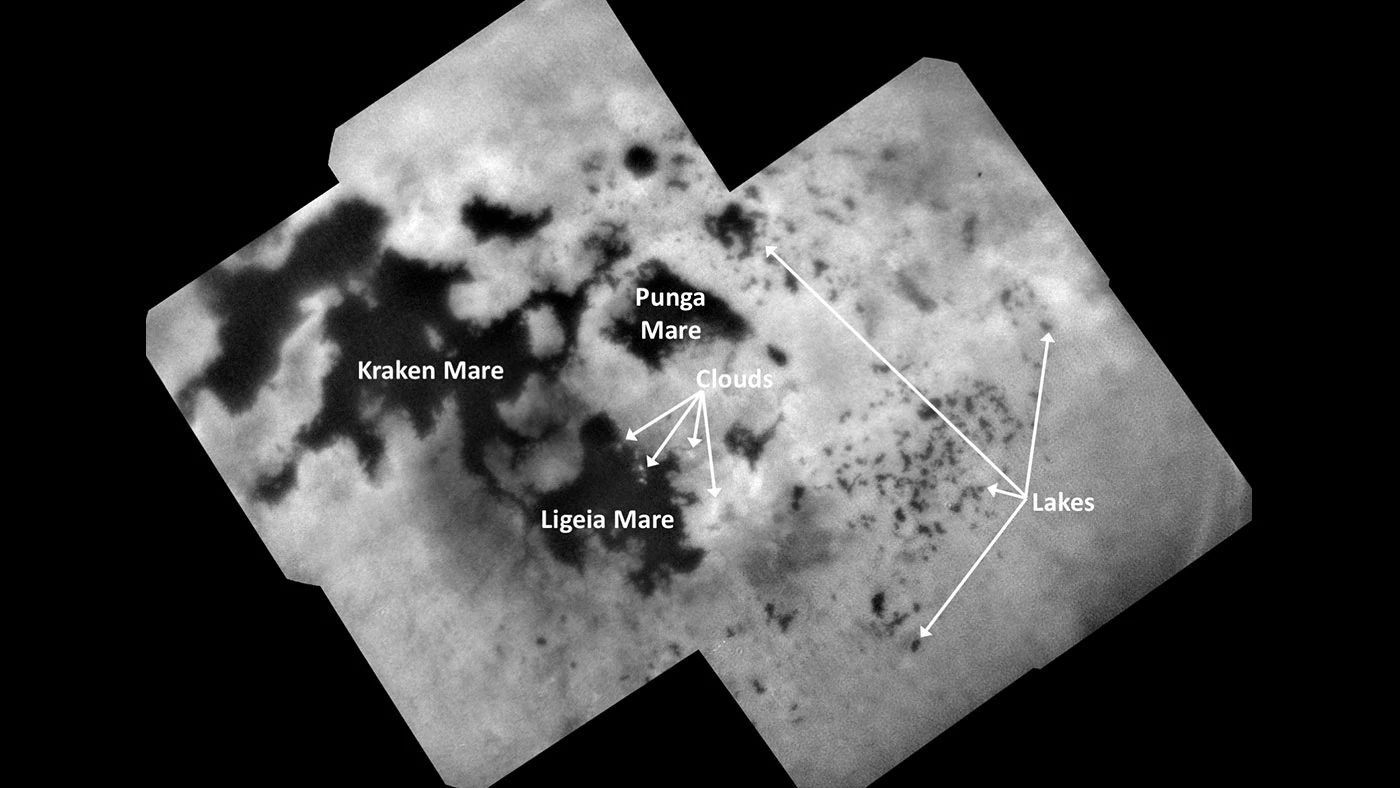 Nothing’s better on a warm summer day than taking a nice jump into a calm lake. You just feel at one with nature when you’re swimming in a natural body of water. Sure, there’s fish farts or whatever else floating around in it, but it’s nature man, deal with it. One place where you’d definitely not want to do a lake dive is Saturn’s moon Titan. That’s because the lake would kill you dead.

In fond remembrance of the groundbreaking Cassini mission, NASA took the opportunity to highlight one of the more stunning images captured by the reliable spacecraft just before its planned death. The composite photo shows off massive collection of lakes and seas located near the north pole of Titan. They look pleasant enough from above, but they definitely aren’t.

What you see in the image above is the liquid-soaked landscape of Titan. The massive seas — Punga Mare, Ligeia Mare, and Kraken Mare — are hundreds of miles across, and the smaller lakes are pretty sizable, too.

If that was all liquid water it would be a real paradise, but it’s definitely not. Instead of water, Titan deals largely in methane and ethane. Those bodies of liquid you see are actually collections of liquid ethane, with methane clouds towering above, and a toxic atmosphere surrounding the entire planet.

“With its dense atmosphere, Titan has a methane cycle much like Earth’s water cycle of evaporation, cloud formation, rainfall, surface runoff into rivers, and collection in lakes and seas,” NASA explains. It’s an incredibly hostile planet, at least for life as we know it, but it’s still an interesting place for scientists to observe.

The simple fact is that we don’t know the limits of where life can form. We know what conditions helped life on Earth to form, but we’ve already been wrong about what is required to sustain life in the past. It was once thought that sunlight was an absolute must, but creatures found near deep-sea vents miles from suitable sunlight proved that light wasn’t mandatory after all.

Could the same be true of water? Could life take root in an ethane lake? Many scientists would say it’s not likely, but it’s also not impossible. There’s even the possibility that liquid water exists beneath the planet’s frozen surface, which could allow microorganisms to thrive. We won’t know unless we actually go there, but that’s not on NASA’s schedule any time soon.