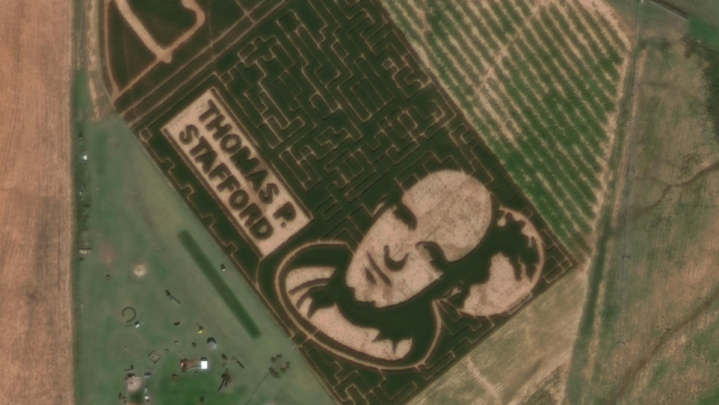 NASA astronauts deserve all the accolades in the book and then some. The men and women that put their lives on the line in the pursuit of scientific advancement are some truly brave souls, and one of them just received a fantastic tribute in his home state.

Thomas P. Stafford, who was selected as a NASA astronaut in 1962, logged an incredible 21 days in space over his long career.  He was part of the second manned mission to orbit the Moon and also commanded the first mission in which the US and then-Soviet space agencies worked together. He finally retired from his NASA post in late 1975, but his remarkable commitment to the space program has given him legendary status. Now he’s been immortalized… in corn.

An absolutely massive corn maze has been carved with Stafford’s likeness, along with his name an part of the Earth in the background. It’s actually a pretty remarkable piece of art, and it’s apparently large enough that it can be captured in great detail from space.

The work was created with the help of a local museum that bares Stafford’s name. “An orbiting satellite from approximately 400 miles above Earth was able to take a photograph of General Stafford’s image in the P Bar Farms corn maze yesterday afternoon!,” the Stafford Air & Space Museum wrote in a Facebook post. In a post a few days earlier the museum noted that the portrait was its “birthday present to General Stafford.”

The carved image is some 500 feet wide and is located a few miles from the museum. It’s a stunning tribute to one of NASA’s many legends, and the 88-year-old Stafford surely appreciated the gesture.