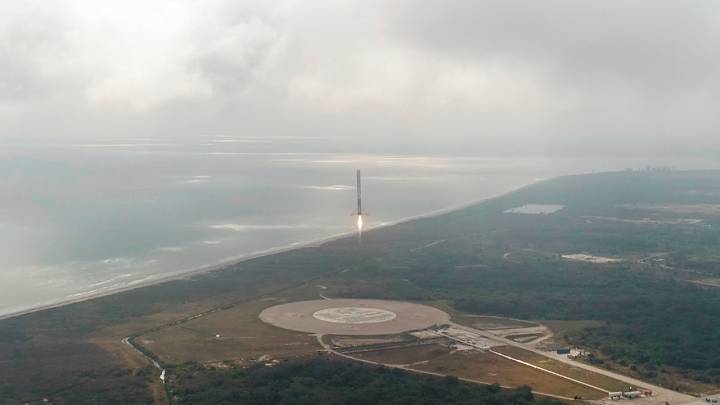 SpaceX successfully landed another Falcon 9 rocket on Sunday morning. It’s a manouvre that’s become relatively standard for SpaceX by this point, but this landing was a first — it was the first one to happen in daylight.

What that means for those of you following at home is a drone video taken of the landing that shows, for the first, time, just how impossibly complicated landing a rocket vertically really is.

The move that SpaceX uses to land is called a “hoverslam.” The rocket’s main engine is far too powerful to allow the rocket to actually hover, since the output is fixed (and it’s a lot of output). So, to land the rocket vertically requires timing the burn perfectly so that the rocket’s downwards momentum is wiped out by the engine’s upwards thrust just as the legs touch the ground.

The real-world result is that the rocket comes in way, way faster than you’re used to. If a helicopter tried to land like that, everyone inside would be dead.

A SpaceX engineer once equated landing a Falcon 9 to launching a pencil over the Empire State Building and then landing it on the eraser. That metaphor is all well and good, but it takes a wide view of one landing to really grasp how impressive this is.

This particular Falcon 9 put a Dragon cargoship into orbit successfully. Over the next few days, the ship will move closer and closer to the International Space Ship, and will hopefully rendezvous and deliver 5,500 pounds of cargo in the next few days.