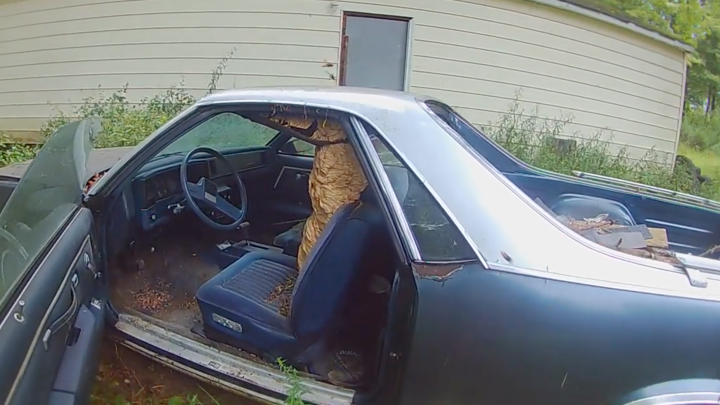 When most people hear what sounds like the buzzing of a wasp they tend move rapidly in the opposite direction. Not The Bee Man. No, The Bee Man lives for the sound of angry insects, and around his home in northern Ohio he’s the man to call if you have a hornet problem.

He recently had the opportunity to showcase his talents in the driver seat of an old El Camino, where a brood of European Hornets had taken up residence. If you have a fear of bees, wasps, hornets, or any other type of flying, stinging insects, now is the time to look away.

The good folks at Fox 8 originally reported the story, and we’re glad they did. The Bee Man’s exploits are well and truly a matter of national interest, and you don’t need more than a few photos to prove that point.

Just look at that thing. It’s practically the size of a human torso, and it’s pretty clear that the hornets had no intention of leaving peacefully. These flying insects — which, it’s important to note, do no provide any pollination for flowering plants and are generally little more than a nuisance — felt The Bee Man’s wrath. After pumping the nest full of a special powder to disperse and disorient the insects, this wasp master methodically dismantled their home and disposed of it.

You can watch the entire thing unfold in the video below.

“Their queens emerge from hibernation in April and look for a well protected place to build and they start it completely from scratch,” The Bee Man, also known as Travis Watson, told Fox 8. “It takes a long time to get workers in the nest, to where the queen starts to only lay eggs, and starting in July, it starts growing quite rapidly.”

All hail The Bee Man.