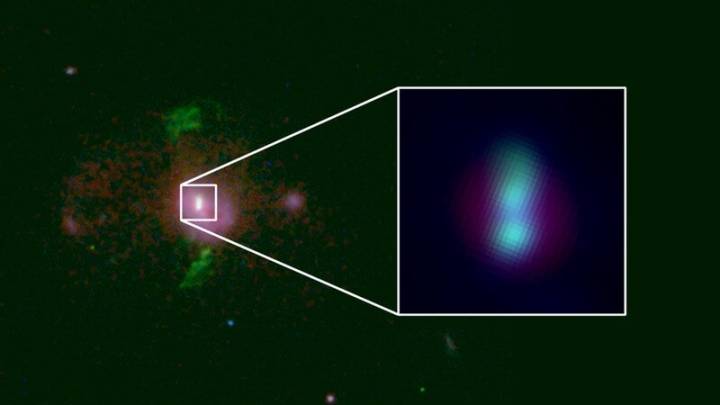 There’s really nothing in the universe that can compare to the awesome power of a supermassive black hole. Well, almost nothing. In a new paper published in the Astrophysical Journal, researchers describe the discovery of not one, but two supermassive black holes located far from Earth, and they’re about to collide.

The black holes, each of which is over 800 million times as massive as our own Sun, are on an irreversible path. When the black holes finally meet, nobody knows what will happen, and astronomers can only guess what the result might be.

By their very nature, black holes do not give off light. However, knowing a black hole is present is made easier by the wealth material they draw in, and it’s assumed that large black holes exist at the heart of most large galaxies like our own Milky Way.

When galaxies collide, the black holes at their hearts begin a dance that lasts a very, very long time. For all the advances in astronomy in mankind’s history, scientists are still very much in the dark when it comes to black hole mergers, and nobody really knows what happens when they meet.

There are theories, however, that black holes enter a sort of “stall” when they get around three light-years apart. If this is true, it would make black hole mergers even rarer than they are already assumed to be, but the truth is nobody knows for sure.

“It’s a major embarrassment for astronomy that we don’t know if supermassive black holes merge,” co-author Jenny Greene said in a statement. “For everyone in black hole physics, observationally this is a long-standing puzzle that we need to solve.”

The black holes described in this study are a whopping 2.5 billion light-years away from Earth, meaning that 2.5 billion years have passed since the two were in the state that we currently see them in. The pair is likely belching gravitational waves into space already, but even if they are, we wouldn’t be able to detect them for billions of years.