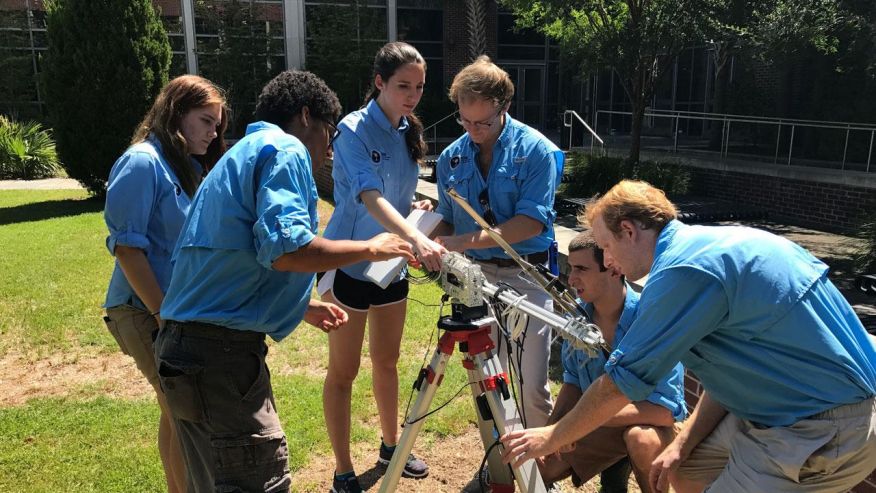 For the first time advances in technology will make it possible for world-wide solar eclipse enthusiasts to watch live-streamed video of the celestial phenomenon – and they are doing it with balloons.

“For the past year-and-a half I have been thinking of nothing but this eclipse, every day, every night. Constantly thinking of little ways to improve or to change the system for the better,” College of Charleston team lead Sam Fink told Fox News. “I can’t put into words how excited I am.”

HOW CAN I SEE THE TOTAL SOLAR ECLIPSE?

Director of Low Country Hall of Science and Math Cynthia Hall along with her team of former and current students are working with South Carolina NASA Space Grant to launch and control a helium-filled balloon above the clouds.

“We are going to start launching balloons in Oregon in the morning and we will be the finale here in Charleston. Those all will be streamed live,” Hall explained. “Even if it is cloudy we will be above the clouds. So hopefully we will get to see a shadow coming across earth as the moon comes between the earth and the sun.”

Hall says they have also partnered with the Coast Guard who will escort Hall, 4 members of her team as well as NASA officials five to 10 miles off the coast where they will be launching the high tech contraption.

“We will take some video and we have some science experiments on there (the balloon’s payload) recording this phenomenon we hardly ever get to experience,” Hall said enthusiastically.

Ground station team member Ashley Turner will be on the Fort Moultrie National Park visitor center roof, 11 miles from downtown Charleston, tracking the balloon and payload while receiving still image and video data on a laptop.

“I’m really excited to be able to watch this eclipse with the public and feel everyone else’s excitement. Kind of feed off of that and it’s going to be truly incredible,” Turner said.

If the balloon pops during its ascent, the team would have to find the payload and re-launch it within the same 30-minute window. Once the eclipse is complete the Charleston ballooning team will use GPS to recover the parachute-equipped gear as it floats back down to earth.

Balloons will be launched from 30 states including Puerto Rico at various times throughout the event, which can be viewed on NASA’s website.

Terace Garnier is a Fox News multimedia reporter based in Columbia, South Carolina. Follow her on twitter: @TeraceGarnier