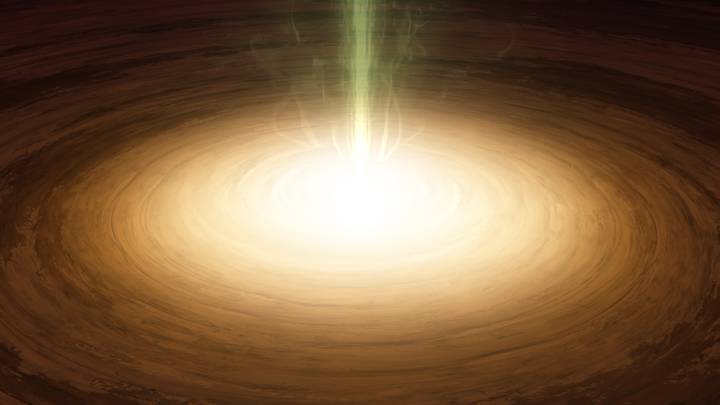 Spotting a distant star is fairly easy for astronomers thanks to modern telescope technology, but finding stars in different stages of their lives can still pose quite a challenge. A recent study of newly discovered star called Gaia 17bpi is giving scientists a rare opportunity to observe a young star going through some big changes.

The star is doing something that scientists rarely get the chance to see: it’s growing, and fast. Gaia 17bpi is in the midst of a evolutionary fit of growth, and it’s bulking up right before astronomers’ eyes.

Gaia 17bpi is incredibly young. It’s estimated to be only a few million years old, making it a newborn in the stellar sense, but it’s gaining mass as a rapid pace. Stars going through this phase of their life are typically tough to spot since they are often still shrouded in massive clouds of dust that later form larger bodies.

Scientists were able to detect and study the star thanks to the combined efforts of two powerful pieces of technology. The European Space Agency’s Gaia satellite is credited with discovering the star, while NASA’s NEOWISE satellite was pointed at the star when it began to shine brighter, hinting at its fast growth. Later, archived data from the Spitzer Space Telescope was scoured for any hint of the star and, as luck would have it, an increase in infrared light from the same star was seen a year prior.

“This is actually the first time we’ve ever seen one of these events as it happens in both optical and infrared light, and these data have let us map the movement of material through the disk and onto the star,” Caltech’s Lynne Hillenbrand, lead author of the new research, said in a statement.

Being able to observe a star as it grows is a rare treat for researchers, as only about a dozen such events have ever been recorded, according to Caltech.