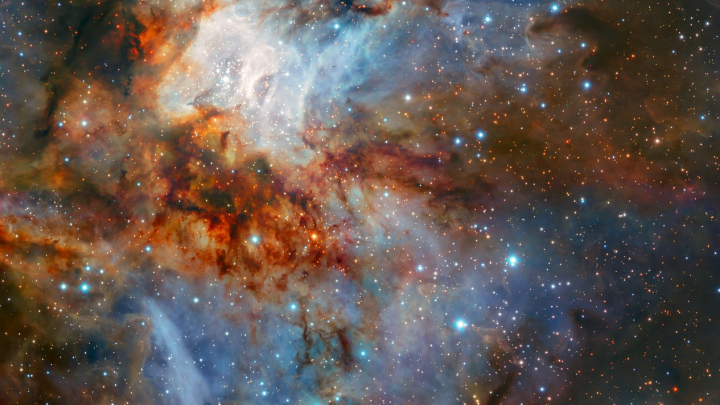 NASA regularly delivers outer space eye candy snapped with its various telescopes, but the European Southern Observatory has plenty of star-gazing power as well, and it just released a new piece of “celestial art” that will stand toe-to-toe with any space photo you’ve ever seen. Captured with the newly installed HAWK-I infrared imager on the Very Large Telescope in Chile, the photo of star cluster RCW 38 is truly a thing of beauty.

What makes the photo so fantastic is the ability of the camera to capture the image in infrared rather than optical wavelengths of light. When relying on optical imaging, any debris between the camera and the light source acts like a mask, but infrared can cut through much of that and reveal the stars and hiding in the background.

There’s a whole lot going on in this image, and you’re forgiven if you can’t make sense of all the colors, but ESO has provided a quick rundown of what we’re seeing:

The central area of RCW 38 is visible here as a bright, blue-tinted region, an area inhabited by numerous very young stars and protostars that are still in the process of forming. The intense radiation pouring out from these newly born stars causes the surrounding gas to glow brightly. This is in stark contrast to the streams of cooler cosmic dust winding through the region, which glow gently in dark shades of red and orange. The contrast creates this spectacular scene — a piece of celestial artwork.

What’s perhaps most amazing about this incredible image is that it’s actually just a test run of some of the telescope’s new tools. The photos were snapped as part of the science verification process that gives scientists a sense of what the hardware is capable of. If this is just a taste of what’s to come, I think we can all be very excited for the future.