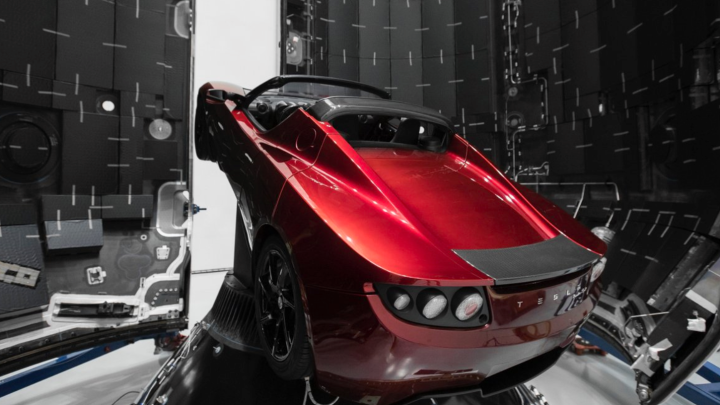 Elon Musk is the top dog at SpaceX, and he’s also the founder of Tesla, so it’s only natural that the 46-year-old entrepreneur would attempt to combine two of his biggest passions sooner or later. How will he aim to accomplish that? By launching Tesla’s latest and greatest electric vehicle on SpaceX’s shiny new Falcon Heavy rocket, of course!

The stunt has been rumored for several months, with Musk stating that he planned to slap a Tesla Roadster into the Falcon Heavy’s payload compartment, only to then backtrack on the claim later. Now it seems the plan is back on track, and SpaceX has formally revealed the exact Tesla that will be headed skyward and, if all goes well, eventually pay a visit to Mars.

The photos released by SpaceX show one of the still-unreleased Tesla Roadsters perched on a large cone inside the Falcon Heavy. The secure mount will keep it stationary as the rocket makes its maiden flight, though there’s still plenty of doubt that the Falcon Heavy will actually be able to complete its stated goals the first time around.

Elon Musk himself has suggested that there’s a really, really good chance the Falcon Heavy crashes and burns before even making it into space. Such an accident would obviously result in the loss of both the rocket itself and its fancy payload, but Musk isn’t particularly worried about that.

“There’s a lot of risk associated with the Falcon Heavy, a real good chance that vehicle does not make it to orbit,” Musk noted earlier this year. “I hope it makes it far enough away from the pad that it doesn’t cause pad damage. I would consider even that a win, to be honest.”

However, if the Heavy manages to pull off its first flight without a hitch, it will result in the shiny new Tesla Roadster entering an orbit with the Sun that will bring it close to Mars. SpaceX is of course playing this up, teasing the Roadster photos with the caption “A Red Car for the Red Planet,” but in truth nobody really knows what might happen. The Falcon Heavy launch still doesn’t have a firm date, but it is expected to take place early in 2018.