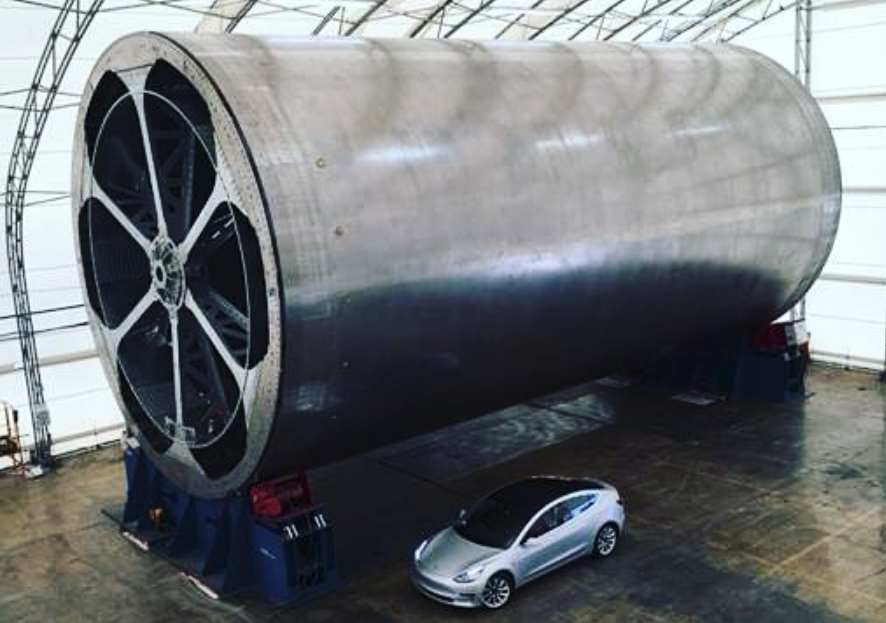 It wasn’t that long ago that SpaceX launched its massive Falcon Heavy rocket for the very first time, exceeding all expectations and accomplishing just about ever goal that the company had for its maiden voyage, but it’s never too early to look into the future. Elon Musk is doing just that by teasing an incredibly early look at the company’s even larger hardware. The BFR is a still-in-planning interplanetary rocket platform that dwarfs the Falcon 9 in every respect, and now we have a good idea of just how large it really is.

Musk posted a new photos on Instagram of a massive metal cylinder that he describes as the “main body tool for the BFR interplanetary spaceship.” A Tesla Model 3 is parked alongside it for a sense of scale, and as you can see from the photo the tool is incredibly huge.

But what exactly is it? As Ars Technica notes, the tool is likely a mold around which the carbon fiber body of the spacecraft will be woven. The tool itself is certainly big, but the actual spacecraft diameter will be slightly larger than that because it will be built around the outside of it. Previously, SpaceX revealed that the BFR will measure some 30 feet in diameter, with first and second stage boosters that measure 190 feet and 157 feet long, respectively. Yeah, this is a seriously large vehicle.

As for the naming scheme, SpaceX’s official stance is that BFR stands for “Big Falcon Rocket.” However, Musk previously stated that BFR is a play on the name of a weapon from the Doom game series. In Doom, the BFG stands for “big fucking gun,” so you can decide what BFR stands for on your own.

As of March, Musk and SpaceX believe that the BFR will make its first test flights sometime in early 2019. Those will be suborbital tests, however, and the timeline for the use of the BFR with interplanetary missions obviously hinges on when NASA or another scientific body is ready to make the trip.