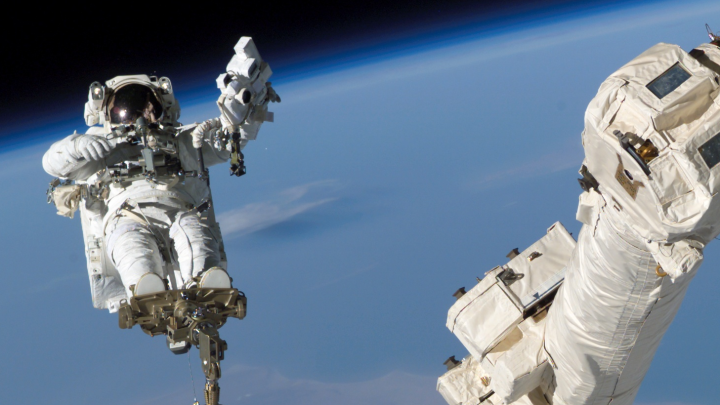 If you’ve ever dreamed of becoming an astronaut, the thought of accidentally drifting away from the safety of a spacecraft or space station has likely crossed your mind. The thought of floating aimlessly into space with no control over your own fate is enough to make your palms sweat, and it’s the reason why astronauts take extreme precautions — including multiple tethers and redundant safety systems — when conducting spacewalks. Now, a new spacesuit concept could add the ultimate layer of protection against being lost in space.

Modern day astronauts are equipped with space suits that have manual propulsion systems that they could, in theory, use to rescue themselves in the event of an accident. These systems provide the wearer with the ability to propel themselves toward, for example, the International Space Station if by some freak circumstance they become disconnected from their tethers and being to float away. However, these abilities might not be enough to save an astronaut in a real emergency, especially if they become disoriented, injured, or unconscious.

Designed by a team of engineers with serious knowledge of space rescue systems and the workings of the ISS in particular, the new spacesuit design is built with the most dire conditions in mind, and could conceivably bring an astronaut back to safety even if they are completely incapacitated.

The new spacesuit, which has been patented by the Charles Stark Draper Laboratory, includes what its inventors call a “system for assisted extravehicular activity self-return,” but what has been nicknamed a “take me home” button.

The system works by monitoring the movement of an astronaut during a spacewalk or some other activity in which they leave the confines of a ship. It can utilize a number of different position-tracking inputs, such as star tracking and GPS, to accurately detect where the wearer is in relation to the ship they may have drifted away from. Once it knows this information, it uses an automated propulsion system to guide the individual back to where they came from, while taking into account the amount of oxygen the wearer has on-hand and the orientation of their body.

Obviously, the idea is to eliminate the human element from the rescue system entirely, while also making it possible for astronauts who are injured or unconscious to find their way back to safety no matter what. However, the concept is still in a fairly early stage, and an actual functional space suit has yet to be prototyped, much less tested.